More details have emerged from a massive battle in Syria that is said to have pitted hundreds of Russian military contractors and... 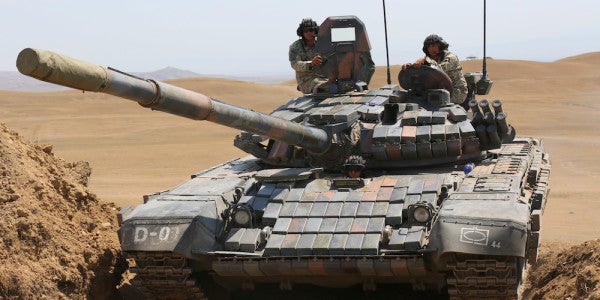 More details have emerged from a massive battle in Syria that is said to have pitted hundreds of Russian military contractors and Syrian and Iranian pro-government fighters against the U.S. service members and their Syrian rebel allies — and it looks as if it was a mission to test the United States' resolve.

Bloomberg first reported this week that Russian military contractors took part in what the United States called an “unprovoked attack” on a well-known headquarters of the Syrian Democratic Forces, a rebel cohort the U.S. has trained, equipped, and fought alongside for years.

Reuters cited several other sources on Friday as confirming that Russian contractors were among the attackers and that they took heavy losses. The purpose of the attack, which saw 500 or so pro-government fighters get close to the U.S.-backed position, was to test the United States' response, Reuters' sources said.

The Russian-led troops reportedly sought to find out how the U.S. would react to the encroachment into what should be a neutral zone.

Regime forces operating Russian-made T-55 and T-72 tanks fired 20-30 tank rounds within 500 feet of the SDF base, which held some U.S. troops, according to Pentagon press secretary Dana W. White.

Related: The US Has Nearly Defeated ISIS in Syria, But It May Be Stumbling Into A Bigger War With Russia And Iran »

“First of all the bombers attacked, and then they cleaned up using Apaches (attack helicopters),” Yevgeny Shabayev, a Cossack paramilitary leader with ties to Russia's military contractors, told Reuters.

An anonymous source told Reuters that Bloomberg's report that 300 Russians died was “broadly correct.” The U.S. reported more than 100 dead.

The Pentagon maintains that only one SDF fighter was injured in the attack.

The pro-regime forces operated without air cover from Russia's proper military. The U.S. warned Russia of the attack, but it's unclear if Russia's military passed on notice to the troops on the ground.

“The warning was 20 minutes beforehand, in that time it was not feasible to turn the column around,” a source told Reuters.

Reports increasingly indicate that Russia has taken to using military contractors as a means of concealing their combat losses as they look to bolster Syrian President Bashar Assad's flagging forces.

Igor Girkin, the former defense minister for the self-declared Donetsk Peoples Republic, a separatist region backed by Russia in eastern Ukraine, said last week that Russian mercenaries operating in Syria who died in combat were cremated on sight to hide the true cost of Russia's involvement.

As the U.S.'s declared mission in Syria of fighting ISIS nears completion, its other motives have taken center stage. The U.S. recently declared it would stop Iran from gaining control of a land bridge to its ally, Lebanon, citing concern that Tehran would arm anti-US and anti-Israeli Hezbollah militants if given the chance.

On top of that mission, the U.S. appears intent on staying on top of Assad's oilfields in the east, to deny him the economic infrastructure to regain control of the entire country and to force UN-sanctioned elections.

The pro-regime attempt to test the U.S. military in Syria proved costly, and it appears now that without the full air power of the Russian military behind them, Assad's forces may be too weak to budge the U.S.