A string of explosions and fires has rocked Russia’s military in recent weeks. The latest one triggered a radiation spike

Over the past month and a half, the Russian military has seen a fire claim the lives of sailors aboard a secret nuclear submarine, an explosion at a ammunition depot, and, as of Thursday morning, an explosion during the testing of a rocket engine at a military test facility 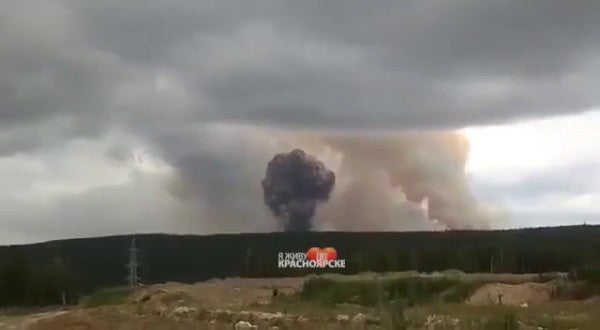 The past few weeks have been rough for the Russian military, as a string of serious accidents have led to dozens of deaths and injuries.

Accidents are certainly not uncommon for the Russian military, which lost its only aircraft carrier last fall when a heavy crane punched a hole in it as the only dry dock suitable for carrying out repairs and maintenance on a ship that size sank due to a power failure, but the last few weeks have certainly been a challenge.

Over the past month and a half, the Russian military has seen a fire claim the lives of sailors aboard a secret nuclear submarine, an explosion at a ammunition depot, and, as of Thursday morning, an explosion during the testing of a rocket engine at a military test facility.

A deadly fire aboard a top-secret submarine in early July

Russia's latest string of bad luck began with a fire aboard a secret deep-diving nuclear-powered submarine and resulted in 14 deaths.

Russian media reports that the submarine was the Losharik, a vessel designed for “intelligence gathering and, probably, the destruction of or tapping into of undersea communications cables,” A.D. Baker, a former naval intelligence officer, previously told INSIDER.

A suspected fire that ultimately triggered an explosion in the battery compartment killed 14 Russian sailors, a number of which were higher-ranking and distinguished officers. While the incident remains classified at the highest levels, a Russian Navy official said the crew's actions had stopped a “planetary catastrophe,” a possible reference to an accident with the sub's nuclear reactor.

A huge explosion at an ammo depot at a military base on Aug. 5

On Monday, an ammo depot at a Russian military base in Siberia said to house around 40,000 artillery shells and other weapons suddenly exploded, igniting fires that killed one and injured over a dozen other people.

The explosion created a massive fireball, and led local authorities to evacuate thousands of people from surrounding communities within 20 kilometers of the blast.

Russia has experienced ammunition depot explosions before. For example, an ammunition storage site in Chapaevsk that housed around 13 million shells exploded in 2013, injuring around 30 people.

A deadly explosion of a missile engine at a military test site on Aug. 8

On Thursday, a missile engine exploded at a Russian naval base, leaving two dead and four others injured. Among the dead and wounded were military and civilian personnel.

The engine, according to Russian state media, exploded while specialists at the base in the rural village of Nyonoksa, a town in northern Russia, were testing the rocket engine's “liquid propulsion system.”

The Nyonoksa range is a critical test site for Russian missile systems, everything from intercontinental ballistic missiles to cruise missiles. Thursday's explosion, the state-run TASS News Agency reported, triggered a spike in radiation in a nearby city.

Authorities insist everything is under control.