The Russian military plans on replacing its standard issue AK-74M rifle with the AK-12 and AK-15 developed by legendary Kalashnikov Concern, according to Military... 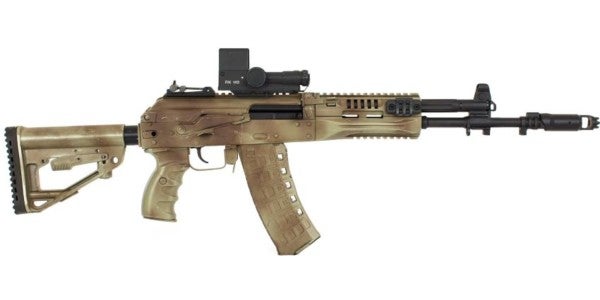 The Russian military plans on replacing its standard issue AK-74M rifle with the AK-12 and AK-15 developed by legendary Kalashnikov Concern, according to Military Times, citing Russian state-owned media.

The “5.45mm AK-12 and 7.62mm AK-15 are officially approved and recommended by Russian Ministry of Defense for issue to Infantry, Airborne and Naval infantry troops of Russian Armed Forces,” the Russian defense manufacturer, which also made the AK-47 and AK-74M, said in a press statement in January.

The AK-12 and AK-15 have 30-round magazines and can shoot 700 rounds per minute, the Kalashnikov statement said. They're also equipped with “red dot, night and IR sights to underbarrel grenade launchers, forward grips, lasers and flashlights, sound suppressors and more.”

The two new weapons will be part of Russia's “Ratnik” program, a futuristic combat system that includes modernized body armor, a helmet with night vision and thermal imaging, and more.