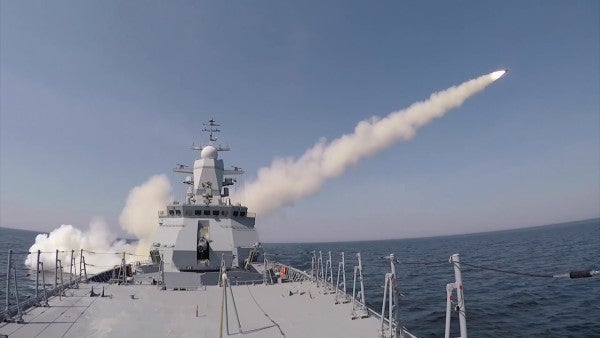 The one-minute clip begins with several shots of Stoikiy, before turning to what appears to be the captain ordering the missile launch in condensed military parlance: “Missile attack. Commander of the second combat unit, surface target, coast 0. Distance of 30 kilometers. Initiate orders.”

A red alarm bell is sounded, and a Stoikiy crew member is shown pushing a large “launch” button. The launch of the two Kh-35 missiles is depicted from multiple angles, including the onboard digital targeting module. The clip then shows close-up footage of the blast impact, before ending with a parting vanity shot of Stoikiy.

Uran, also known as 3M24, is a shipborne variant of the prolific Soviet Kh-35 anti-ship missile introduced in 2003. The latest Kh-35 derivative is “Neptune,” a modernized coastal anti-ship system being developed in Ukraine.

The statement goes on to mention that a total of 10 combat ships and support vessels participate in the exercise. The Stoikiy crew performed several other exercises that day, including ECM (electronic countermeasures) techniques and fire coordination training.

But the otherwise dry statement is notable in one key respect: it continues the recent Russian trend of positioning their military exercises as a direct response to NATO actions. “The combat training of the [Baltic] fleet takes place against the backdrop of the ongoing presence NATO naval forces in the southern region of the Baltic Sea,” the statement read.

Stoikiy is the fifth Corvette of the Steregushchiy-class line, transferred to the Baltic fleet in 2014.

As previously discussed by the National Interest, the Steregushchy corvettes are being outfitted with some of the latest Russian naval technology; most prominently, the Paket-E/NK system that allows anti-submarine MTT torpedoes and heat-seeking M-15 anti-torpedoes to be loaded onto and fired from the same integrated launcher.

What can this tell us about the Russian Navy's developmental plans over the coming decades?

A clear pattern has emerged since the late 2000's: Russia's naval modernization efforts have been largely focused on smaller surface vessels and submarines, like the Steregushchy corvettes and Borei/Yasen lines.

This may herald the beginning of a long transition away from the sprawling, overlapping, jack-of-all-trades but master of none naval roster of its Soviet predecessor. What comes in its place will remain to be seen, though current signs are pointing to the formation of a lean, small but cost-effective, rapid response force meant to secure Russia's maritime frontiers rather than project force across the world.

To be sure, a modernization program along these lines will involve difficult choices; not the least of which is the prospective decommissioning of Russia's sole, geriatric aircraft carrier. Nevertheless, this is the sort of compromise demanded by the Kremlin's ambitious effort to simultaneously modernize large swathes of the Russian military on a comparatively modest budget.

SEE ALSO: Russia May Finally Put Its Godawful Sh*theap Of An Aircraft Carrier Out Of Its Misery

WATCH NEXT: A Missile Launch Fails During A Russian Navy Parade In Annexed Crimea