Russia has exploited social media networks to target current and former U.S. military personnel with propaganda, conspiracy theories and other... 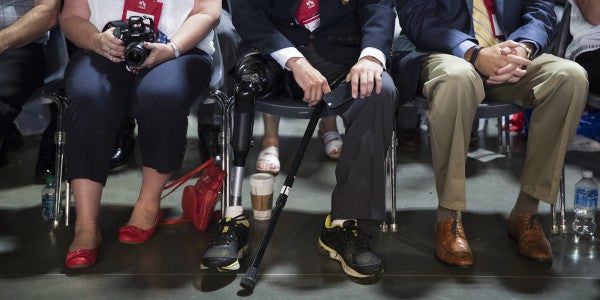 The Oxford University study, which traced the reach of three websites known to have shown ads and posts linked to the Russian government, adds a new dimension to revelations of a Kremlin cyber campaign aimed at undermining Americans’ trust in democracy during last year’s U.S. elections and helping Donald Trump win the presidency.

“We’ve found an entire ecosystem of junk news about national security issues that is deliberately crafted for U.S. veterans and active military personnel,” said Philip Howard, a professor of internet studies who led the research. “It’s a complex blend of content with a Russian view of the world — wild rumors and conspiracies.”

The study found that Russia’s communication inroads with the military community on Twitter “are not presently very deep,” and that it has had more success gaining influence through Twitter than Facebook.

The researchers sought to map how social media amplified the impact of the websites that sprang up over the last four years:

— Veteranstoday.com, which in late 2013 began publishing content from New Eastern Outlook, a geopolitical journal of the government-chartered Russian Academy of Sciences.

— Veteransnewsnow.com, a sister site that started posting information from the Moscow think tank Strategic Culture Foundation during the same time.

— Southfront.org, which was registered in Moscow in 2015 and soon partnered with Veterans Today.

Politico first reported last June about Russia’s recent military targeting, describing how Veterans Today mixed advice for veterans on how to find jobs and pay medical bills with headlines such as “Ukraine’s Ku Klux Klan –– NATO’s New Ally.” It said that while the United States confronted Syrian leader Bashar Assad, a Russian ally, over chemical weapons attacks on Syrian children last spring, the site carried a story headlined: “Proof: Turkey Did 2013 Sarin Attack and Did This One Too.”

Mike Carpenter, a former senior Pentagon official who specialized in Russian issues, said the three websites all “appear to be Russian fronts, given the high degree of Russian content.”

“(T)hey bill themselves as providing ‘alternative points of view,’ similar to Russian propaganda channels like RT and Sputnik,” he said.

Facebook disclosed last month that a company tied to a Russian “troll farm,” whose operatives spread misinformation, set up fake accounts that bought 3,000 election-related ads. It said 75 percent of the ads, which the company said may have popped up in the Facebook newsfeeds of as many as 10 million people, focused on divisive issues such as immigration, gun rights and gay rights.

The Kremlin’s global “active measures” campaigns have showered disinformation on democracies around the world since the Soviet era. But newer social media tools have enabled the explosive growth of networks dedicated to distributing false and misleading news.

The Oxford study categorized 12,413 Twitter users and 11,103 Facebook users whose social media messages referred to or carried content from one or more of the Russian-linked websites from April 2 to May 2, 2017. The researchers used sophisticated modeling in an attempt to examine how Twitter posts and “likes” of Facebook posts broadened the effects of junk and phony news on the three sites, sometimes directly connecting the recipients with Russian trolls.

“On Twitter there are significant and persistent interactions between current and former military personnel and a broad network of Russia-focused accounts, conspiracy theory-focused accounts and European right-wing accounts,” the researchers concluded.

The interactions are an indication that the messages are being noticed and may have some impact.

In the networks reaching vets and active-duty troops, the researchers wrote, both liberals and conservatives were drawn to posts on the websites that laid out supposed conspiracies, including some pointed at the U.S. government.

The researchers noted that they couldn’t track all of the relevant content, in part because the limited data publicly available from Twitter and Facebook does not include fake accounts that the two companies detected and closed.

Carpenter said that under President Vladimir Putin, the Kremlin’s propaganda machine “has become very good at targeting specific demographics and subgroups within American society, with tailored content in order to sow discord and undermine trust in government.”

He said the “information warfare” meshes with Russian “spear phishing attacks” — attempts to compromise the emails of U.S. service members and military contractors.

“This is further evidence of the Kremlin’s holistic effort to try to get inside the minds, computers and communications of our forces to steal information on things such as the locations and deployment schedules of specific military units and to conduct psy-ops (psychological operations) against our troops.”

Howard, who has tracked Russia’s use of social media to circulate propaganda in dozens of countries, and research colleague Bence Kollanyi, wrote in an op-ed in The Washington Post that their studies have been handicapped because of the lack of cooperation from Twitter and Facebook.

“No doubt, Twitter and Facebook have higher-quality data on all this,” they wrote. “They certainly employ some of the best network analysts and data scientists in the world. Yet it has taken an FBI inquiry, congressional investigations, nearly a year of bad press and pressure from outside researchers such as us to dislodge some examples of Russian interference.

“The next step should be open collaborations that explain network effects and help restore public trust in social media.”