Russian admiral: It’s not weird at all that sailors were sunbathing shirtless as their destroyer nearly collided with a US warship 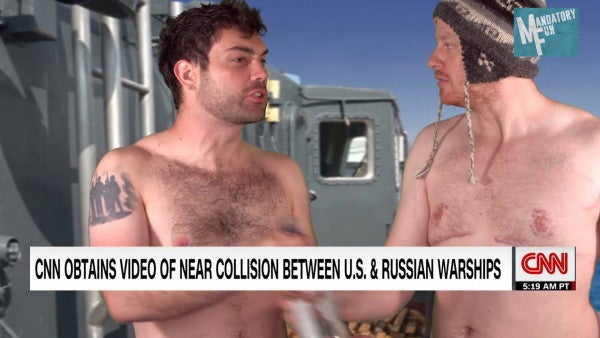 When a Russian destroyer came close to colliding with a U.S. Navy warship last Friday, Russian sailors were spotted sunbathing on the deck. A retired Russian admiral says there's nothing weird about that.

Russian Admiral Valentin Selivanov, a military analyst who previously served as the chief of staff of the Russian Navy, told Russian media Monday that there's nothing wrong with relaxing topside when you're not at war.

“There is a time for war, and a time for sunbathing,” the admiral explained.

Each side blamed the other for the incident; however, the U.S. Navy released photos and videos to support its version of events.

In one video, at least two Russian sailors were seen sunbathing shirtless on the helicopter pad. One sailor is sitting down, and pants aren't immediately visible, although the video isn't particularly clear.

“Our vessel is on the move in the open sea,” Selivanov told the Russian government's Sputnik news agency, adding, “The seamen and officers have had lunch. They are on their after-lunch break, glad to be serving in the south. Sure, if one was sunbathing, then dozens were. And yes, you have to be undressed to sunbathe.”

The sunbathing Russian sailors has been interpreted a couple of different ways.

The New York Times noted the sailors and argued that this behavior could suggest that “the Russian vessel was not on high alert at the time and was not engaged in a planned provocation.”

The Russian statement on the incident claimed that the USS Chancellorsville put itself on a collision course with the Russian destroyer and the “crew was forced to conduct an emergency maneuver.”

Were the Russian warship seriously concerned about the possibility of a collision, there would have likely been an all-hands response. The lack of such a response and the presence of Russian sailors calmly sunbathing on the deck could signal that the Russian destroyer was not the reactive party in this incident.

It is difficult to know for certain what was going on aboard the Russian ship, but U.S. naval experts have already cast doubt on Russia's narrative, with one telling Business Insider that the USS Chancellorsville had the right of way and accusing the Russian warship of acting in a “dangerous” fashion.

SEE ALSO: Russia Is Planning To Build Its First Nuclear-powered Aircraft Carrier After Breaking Its Only Existing Garbage Flattop