Russian special forces staged a mock invasion of an island in the Gulf of Finland just days before President Donald... 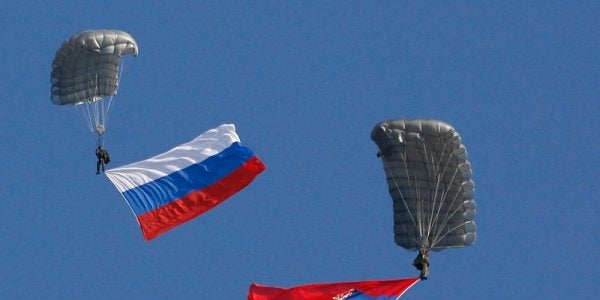 Russian special forces staged a mock invasion of an island in the Gulf of Finland just days before President Donald Trump is set to meet with Russian President Vladimir Putin in the Finnish capital.

The Russian forces parachuted onto the island of Gogland, which is part of Russia but located roughly 70 miles from Helsinki, from a Mi-8AMTSH helicopter at an altitude of 2,500 meters. The soldiers used satellite equipment to steer themselves to the landing site, according to a July 10 press release from the Russian Defense Ministry.

Once on the ground, the Russian forces camouflaged their parachutes and headed into the interior of the island to destroy a series of mock communications stations, radars, and ASM batteries, Defense One reports.

The island is equipped with a helipad, but after destroying the targets the soldiers prepared a landing site for the helicopter for their escape.

The soldiers who participated in the mock invasion had “not less than a hundred jumps with parachutes of various types,” according to the Russian Defense Ministry statement.

This exercise comes amid increasing concern from many European countries about Russian aggression in the region in the wake of the 2014 annexation of Crimea.

Meanwhile, as Trump prepares to meet with Putin, some NATO member states seem to be concerned he's too soft on the Russian leader and doesn't fully value the historic alliance.

At the NATO summit in Brussels on Wednesday, Trump baffled and angered other NATO leaders when he suggested Germany is “controlled” by Russia in relation to an energy partnership between the two countries.

Trump was widely criticized for his rhetoric and demeanor at the summit. Nicholas Burns, a former US ambassador to NATO, accused the president of “diplomatic malpractice” and expressed concern over Trump's disposition toward Putin.

“You cannot imagine any American president all the way back 75 years deciding to become the critic-in-chief of NATO,” Burns said on Wednesday. “I mean, it's Orwellian. He's making our friends out to be our enemies and treating our enemies, like Putin, as our friends, and he's misrepresenting the facts.”

Trump is scheduled to meet with Putin in Helsinki on July 16.

Prior to departing for Europe on Tuesday, the president suggested he was most looking forward to his summit with the Russian leader.

“I have NATO, I have the UK, which is in somewhat turmoil, and I have Putin. Frankly, Putin may be the easiest of them all. Who would think? Who would think?” Trump said at the White House.