Wanted — FBI recruits for a career in surveillance. Must be comfortable tailing subjects by foot, vehicle or on public... 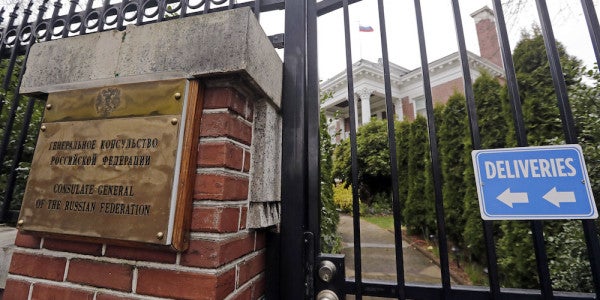 Wanted — FBI recruits for a career in surveillance. Must be comfortable tailing subjects by foot, vehicle or on public transportation, use electronic equipment, and work nights and weekends as necessary.

The online job post at fbijobs.gov gives a glimpse into the shadowy world of espionage that continues to unfold between the United States and Russia. The Trump administration cited the risk of such clandestine activities in its decision Monday to close the Russian Consulate in Seattle.

The Cold War spycraft that was the stuff of John le Carré thrillers may have taken a back seat in the popular imagination in the age of post-9/11 terrorism, but for FBI agents trying to identify Russian consular staff who are using their positions as cover for intelligence gathering, the work never stopped, and it may have intensified amid growing tensions between Moscow and the West.

“It’s no secret that consulates serve as a potential platform for covert activities,” said Charles Mandigo, a former special agent in charge of the FBI Seattle office, “just as consulate personnel and embassy staff provide the country with the opportunity to insert a spy onto U.S. soil.”

Related: The U.S. Is Shutting Down A Russian Consulate Near A Major Navy Nuclear Arsenal »

Seattle has everything to attract espionage interests from Russia, or any number of other countries, he said.

“Think about it. There’s Boeing, which runs all kinds of black operations,” said Mandigo, referring to the giant defense contractor’s secret work with the Pentagon. “There’s the University of Washington, which gets all kinds of government contracts. There’s Microsoft. There’s proximity from a military point of view, particularly Bangor.”

Naval Base Kitsap, near Bremerton, includes the submarine base at Bangor, home to the West Coast fleet of Trident submarines, part of America’s triad of land-, air- and sea-based nuclear arsenal. It’s estimated that within the past decade, up to a quarter of the country’s nearly 10,000 nuclear weapons have been stored there.

Tracking when Russian officials come and go from work, when they retire for the night, and who their friends are can be labor-intensive work.

“It can take a long time to identify somebody,” Major said. “You want to know everything you can about this person to paint a picture of them.”

A senior Trump administration official did not cite any specific incident of Seattle-based espionage linked to this week’s orders but said the actions, which included the expulsion of dozens of Russian diplomats, were part of a broader effort to “degrade” the Russian capability to spy.

The closure of the Seattle consulate — which leaves only three remaining in the country, none on the West Coast — is part of a broader response in the West to allegations that the Kremlin was involved in the nerve-agent poisoning of a former Russian spy and his daughter in Salisbury, England.

“There will be a response”

The closure and expulsions were condemned by Russian government officials, who are expected to announce retaliatory measures. They say that diplomatic staff being expelled have worked in space, science, trade, culture and other areas.

“Truth will always prevail. We shall not be provoked into an emotional outburst. But there will be a response,” declared the Russian ambassador, Anatoly Antonov, in a statement posed on the embassy website.

The decision to close the consulate has also received pushback from some Americans. They point out that the U.S. and Russia both use diplomatic installations for intelligence gathering, and that in this era of frosty relations, it is important to keep consulates, and lines of communications, open.

“We regret that the interests of U.S. businesses and private citizens are being jeopardized in a political ‘tit-for-tat’ exchange between the governments,” wrote Derek Norberg, president of the Washington-based Council for U.S.-Russia Relations, in a letter to State Department officials after last year’s announcement of the closing of the Russian Consulate in San Francisco. He is drafting a similar letter of protest about the closing of the Seattle consulate.

Russian espionage interest in Washington state stretches back for decades — long before the 1992 opening of the Seattle consulate.

In 1987, even amid the glasnost thaw, the Seattle Post-Intelligencer broke a story that Soviet submarines — using intelligence garnered from the spy ring formed by John Walker — had penetrated the Strait of Juan de Fuca through the 1980s. Walker served many years in the U.S. Navy, and the leaked information helped Russians slip past U.S. anti-sub defenses.

A decade later, in 1998, Jack Daly, then a Navy lieutenant and intelligence officer, was dispatched on a Canadian helicopter to take surveillance photographs of a Russian cargo ship in the Strait of Juan de Fuca that was suspected of spying on the Trident submarines. He says the ship fired a laser that singed his retinas. He sued in U.S. District Court over the laser attack and his injury, but in 2002, a jury rejected his claim.

As Russian President Boris Yeltsin took power in the 1990s, there was lots of talk of democracy in Russia, and many U.S. officials thought espionage would ebb. “We wanted our peace dividend, and didn’t want to worry about this anymore,” said Major, who added that the spying did not end and the FBI fought to continue support for counterintelligence as the new consulate opened in Seattle in 1992.

Ayn Dietrich-Williams, FBI spokeswoman in Seattle, declined to comment on FBI surveillance operations in the Puget Sound region. She said the FBI does not disclose the numbers of employees at the Seattle field office because it fluctuates.

Mandigo, who served 29 years in the FBI until his retirement in 2003, said the bureau has remained fiercely protective of its role in counterespionage, as there aren’t other law-enforcement agencies assigned to the task. He said the Seattle “active” counterintelligence division survived the shifting priorities within the bureau in the wake of the Sept. 11, 2001, terrorist attacks.

Mandigo’s leadership of the Seattle FBI office included nominal oversight of agents, technicians and others assigned to foreign counterintelligence. But Mandigo explained that he had very little to do with these operations because they were supervised and directed out of FBI headquarters in Washington, D.C., or from New York.

In addition to keeping track of Russians, some of this FBI work also involved debriefing Americans who traveled to Russia.

One Washington businessman with work that takes him to Russia said he repeatedly has been approached by FBI officials who want to understand what he does. They don’t ask him to conduct espionage but want him to report any criminal activity he sees, said the businessman, who requested anonymity due to the sensitivity of those contacts.

FBI agents also may be involved in sting operations that target Americans trying to sell secrets.

In 2017, Gregory Allen Justice, a 49-year-old Boeing engineer from Culver City, Calif., pleaded guilty in U.S. District Court in California to charges of attempted economic espionage. He tried to sell documents to an undercover agent he believed to be a Russian intelligence officer in a case developed out of the FBI office in Los Angeles.