A Russian surveillance jet based out of Travis Air Force Base in northern California has been enjoying access to restricted air space that are off limits to U.S. passenger planes since last week 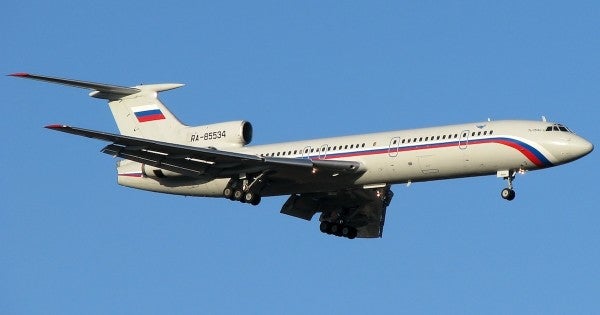 A Russian surveillance jet based out of Travis Air Force Base in northern California has been enjoying access to restricted air space that are off limits to U.S. passenger planes since last week.

In turn, Russia has allowed U.S. spy planes to fly over its nation's most sensitive military bases.

The arrangement is in accordance with the Treaty on Open Skies, according to CBS Sacramento, which has spotted the Russian jets doing their part. The 27-year-old peacekeeping effort allows both countries to monitor one-another's military assets. The transparency agreement extends to 32 other nations.

The Russian jet surveying West Coast sites including Point Mugu, Coronado Island and Camp Pendleton, is a reportedly a Tupolev 154. The plane, operating with the blessing of the White House, can snap high-resolution photos while in flight. U.S. observers were on board the Tu-154 during its monitoring missions, according to CBS.

The Tu-154 fleet was introduced in 1968 and has seen various incarnations for both military and civilian use. The planes have reportedly experienced almost 40 accidents over the past 50-years, including a fatal crash on Christmas Day 2016 that killed 92 military members. The Russian government temporarily grounded the fleet following that tragedy.

Open Skies exercises this week were Russia's first over the U.S. in 2019. American surveillance planes last took flight over Russia in December after Russian navy vessels detained three Ukrainian ships. U.S. officials said that exercise served as an affirmation to allies including Ukraine that the west was keeping an eye on matters abroad.

SEE ALSO: Who Really Shot Down That Russian Aircraft Over Syria?

~popular_source-pageview
aircraft
How The Other Half Fights
news
Russia