Why Are 100,000 Russian Troops Headed Straight For NATO’s Borders?

Russia is about to kick off a major military exercise called Zapad on Sept. 14, which some international observers worried that... 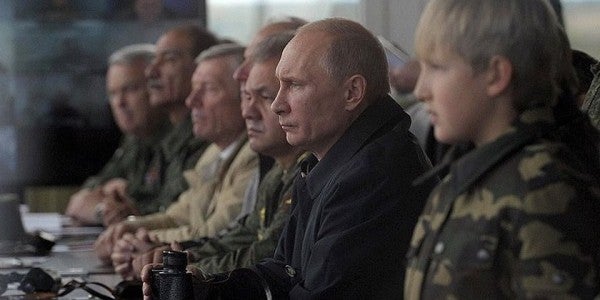 Russia is about to kick off a major military exercise called Zapad on Sept. 14, which some international observers worried that it could be a “Trojan horse.”

“People are worried this is a Trojan horse,” U.S. Army Gen. Ben Hodges told Reuters in July. “They say, 'We're just doing an exercise,' and then all of a sudden they've moved all these people and capabilities somewhere.”

But Dmitry Gorenburg, a senior research scientist at CNA, wrote in The National Interest that these reports were “panicked accounts.” Olga Oliker, a senior adviser and director of the Russia and Eurasia Program at The Center for Strategic and International Studies, also told Business Insider that she agreed with Gorenburg's take.

Either way, that “100,000 figure is pretty off the wall,” Mark Galeotti, a senior research fellow at the Institute of International Relations Prague, told Business Insider in an email.

These “panicked accounts” all appear to stem from reports about Russia using 4,000 train cars to transport troops back and forth from the exercises, which could indicate those large western estimates.

“I don't know exact calculations, they just threw out the 100,000 number,” Tack said, adding that they basically figured Moscow would pack each rail cars to the brim with 72 soldiers, and that they multiplied the final number by 1.5 times on the assumption that the Kremlin was keeping the real number of rail cars secret.

Gorenburg also said that, while the famed Russian 1st Guard Tank Army was reported to be participating in 2017, Russian officials have yet to confirm it. Tack said that the tank army would partake in the exercises, but it would only be a small contingent of the corps-sized force.

In any event, “it's hard to know how many troops will be in the [2017 Zapad exercises]” because of the disagreement over who should be counted, Galeotti said.

“What we do know is that the total number of Russian troops on Belarusian territory is not expected to exceed 3,000 personnel,” Gorenburg wrote, and “the likelihood of this exercise serving as cover for some larger nefarious aim, whether it is an attack on Ukraine or Lithuania or a stealth occupation of Belarus, is practically zero.”

It's “highly unlikely the Russians would park troops in Belarus uninvited,” Galeotti said. “Minsk has already made it clear that it would not welcome this,” and Moscow doesn't have the budget to maintain troops there.