Sailor Arrested For Trying To Hire Hitman To Kill His Wife

A sailor is in federal custody this week on charges he tried to hire a hit man to kill his... 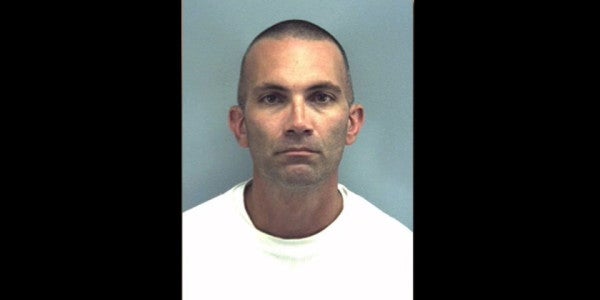 A sailor is in federal custody this week on charges he tried to hire a hit man to kill his estranged wife.

The price: About $50,000 in life insurance money and 80 Adderall pills that had been prescribed to him by the Navy.

Petty Officer 2nd Class Chadwick Stanley Ghesquiere, 38, was arrested last week and ordered Friday to be held without bond. A preliminary hearing is set for Wednesday in U.S. District Court in Norfolk.

Federal agents learned of the alleged plot from one of Ghesquiere’s friends, court documents said. The friend explained that Ghesquiere and his wife were getting divorced, and Ghesquiere didn’t want to pay child support.

Special Agent Edward Winkelspecht with the Bureau of Alcohol, Tobacco, Firearms and Explosives recounted much of the investigation in an affidavit filed with the court. He said the friend – referred to as a “confidential source” – approached Naval Criminal Investigative Services in late July about Ghesquiere and helped set up multiple stings.

According to the affidavit, the source said Ghesquiere and his wife had been having marital problems for two or three years. The source added that Ghesquiere told him or her in late June or early July his wife wasn’t going to let him see his child and he wanted to do something about it.

“I want to get rid of this (expletive) because she is going to keep (expletive) with me,” Ghesquiere said, according to the affidavit. “Do you have someone that will off that (expletive).”

Ghesquiere added he was still the beneficiary on his wife’s $100,000 Family Savings Group Life Insurance policy, and he promised to give half to anyone who killed her, the affidavit said.

The source told Ghesquiere he or she knew someone who could kill the wife and urged him not to discuss the matter with anyone else. In reality, the source contacted the NCIS about what Ghesquiere was plotting, the affidavit said.

The source recorded a subsequent conversation with Ghesquiere on Aug. 2 at the source’s home. And two days later, Ghesquiere and the source talked again about the plot inside a vehicle the ATF had equipped with cameras.

The source eventually introduced Ghesquiere on Aug. 10 to an undercover ATF agent who was posing as the hit man. During the conversation, Ghesquiere told the agent he wanted his wife dead. He offered $1,000 and 80 pills of Adderall as a down payment. He said he would later pay $50,000 from the insurance money, the affidavit said.

Ghesquiere also gave the undercover agent a firearm during the meeting, the affidavit said.

On Aug. 16, Ghesquiere provided the undercover agent his wife’s address, a description of her known vehicles, two photographs and the pills, the affidavit said.

According to the Navy, Ghesquiere is an aviation structural mechanic. Since May 2014, he has been assigned to Strike Fighter Squadron 106 – an F/A-18 Hornet and Super Hornet training squadron based at Oceana Naval Air Station in Virginia Beach.