Sailor dies after fall from ship’s ladderwell during Mediterranean ops

Officials are investigating the death of a sailor who fell down a ladderwell, which can be inclined at steep angles on Navy ships 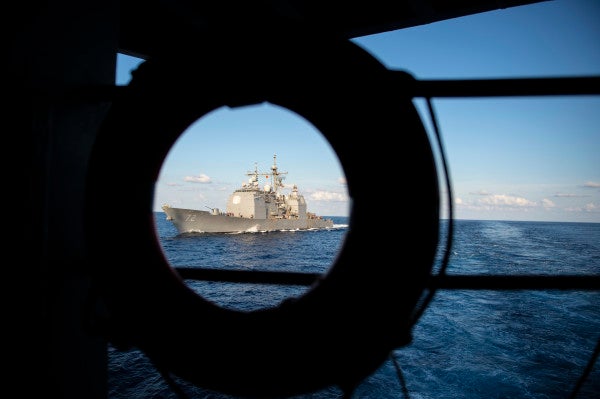 Officials are investigating the death of a sailor who fell down a ladderwell, which can be inclined at steep angles on Navy ships.

The sailor was a second-class petty officer, according to data from the Naval Safety Center, which tracks serious mishaps at sea, in the air and ashore. The sailor sustained fatal injuries from falling down a ladderwell, the center reported this week.

The Vella Gulf is currently operating in the Mediterranean Sea, Comer said.

Citing unspecified Navy records, Navy Times reported the sailor fractured his head in the fall. He was flown ashore by helicopter, according to the paper, where he was pronounced dead at Souda Bay in Greece.

No additional details about the sailor's death were immediately available.

A 2019 Navy news release said falls from ships' ladders are among the most common mishaps reported to the Naval Safety Center. Ladder mishaps, it added, result in more lost workdays than any other reported incidents.

Commands are encouraged to discuss the dangers of shipboard ladders.

“Multiple factors contribute to falls on ladders, including running, carrying heavy objects that obstruct the view and movement, sliding down ladders, and not utilizing the handrails,” the news release stated.

Data from the Naval Safety Center showed more than 1,200 ladder-related mishaps reported between 2006 and 2012. The accidents resulted in sailors missing more than 10,000 workdays.

Ship ladders can be dangerous, the Safety Center warns, with most inclined at a 68-degree angle. Some are even steeper if they're in space-constrained areas or have room for storage underneath.

“Many of these mishaps occur while Sailors are moving equipment or carrying various items up and down inclined ladders,” the Naval Safety Center notice states.

The Vella Gulf, which is based out of Norfolk, Virginia, recently participated in convoy operations across the Atlantic. The cruiser escorted the vehicle cargo ship Benavidez and vehicle carriers Resolve and Patriot as the Navy practices convoy operations amid new threats at sea from near-peer competitors.