A Sailor In Gender Transition Is Rocked by President’s Tweets

On Friday morning, two days after President Donald Trump tweeted that transgender Americans would no longer be allowed to serve... 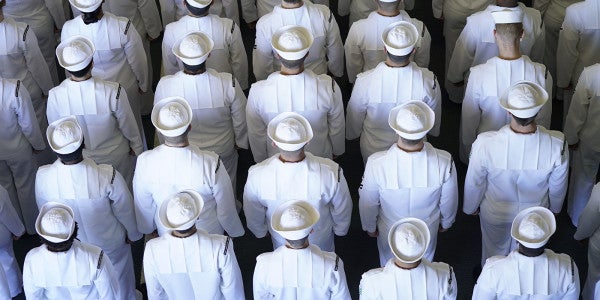 On Friday morning, two days after President Donald Trump tweeted that transgender Americans would no longer be allowed to serve their country in the military, I met up with a Navy petty officer at a Coffee Bean & Tea Leaf here in Mission Valley.

The sailor is a 28-year-old transgender woman who wore jeans and a blue hoodie with the word “Navy” in bold yellow letters. She looked tired and seemed downcast.

She told me her name is Laureline Morgenstern. It is not the name that appears on her driver’s license, nor the name she is known by in the Navy. It is the name she intends to adopt when her gender transition is complete. Had I seen her on the street, I would have assumed she was an extraordinarily good looking man.

About a month ago, Morgenstern, who was raised in a military family in San Diego, began physically transitioning to female. Right now, her Navy colleagues think she is an out gay man.

“I had kind of accepted that I was going to live my life as gay, and not move forward, since being transgender in the military was illegal, and because there was nothing I could do,” she told me. “I did not see any way of transitioning without getting in trouble.”

She was deeply depressed and occasionally suicidal.

Last fall, however, the Department of Defense announced it would no longer bar transgender service members and would also provide medical support for those in transition.

Morgenstern made a life-altering decision. She revealed her situation to her superior officer and was referred to a Navy doctor specializing in gender transition. With the Navy’s help, she is on her way to becoming the person she felt she always was.

She began taking hormones — prescribed by her Navy doctor — and has been experiencing mood swings familiar to any post-pubescent woman. “So far, the worst thing about this is the hormones,” she said, “because I am so emotional.” (I wanted to ask, “Emotional, or Scaramucci emotional?” I refrained.)

Next year, during Pride Week, Morgenstern said, she plans to come out as a transgender sailor. At least she will if she hasn’t been kicked out of the Navy.

On the day Trump dropped his unexpected policy bomb barring transgender individuals from serving “in any capacity” in the U.S. military, Morgenstern was at work, on watch.

“My phone blew up,” she said. “I was worried. And angry that something so discriminatory and hateful was being posted on Twitter. Later on, I reached out to my command. I have received nothing but support.”

Is there anyone out there who really believes that Trump, as he claimed, consulted with generals and military experts before blindsiding the Defense Department with his anti-trans tweets?

Is there anyone out there who takes him seriously when he tweeted that the U.S. military cannot afford to be “burdened with the tremendous medical cost and disruption that transgender in the military would entail”?

Contrary to what the president asserted, a 2016 Rand Corp. study that was sponsored by the Department of Defense estimated that between 30 and 140 service people might start hormone treatments each year, and between 25 and 130 transition related surgeries would occur, at a total cost of between $2.4 million and $8.4 million. At any given time, Rand said, between 10 and 130 active members could have “reduced deployability” as a result of gender-transition related treatment, a number it described as “negligible.”

Out of about 1.3 million active service members, Rand estimated, between 1,320 and 6,630 are transgender.

“We are such a tiny group of people, we trans people,” said Calpernia Addams, 46, a Highland Park trans woman who served in the Navy and Marine Corps during the first Gulf War as a medical combat specialist. “You don’t just sign up to join the military and then get a $20,000 genital reassignment surgery.”

As a medic, Addams said, she regularly gave free injections of the hormone Depo-Provera to servicewomen and military wives who did not want to get pregnant. “It’s almost the same exact hormones as I would have gotten,” said Addams, had she transitioned while still on active duty. “Why don’t we cut back on one of those $10,000 toilet seats the government is so famous for buying, for the 100 or so trans people who might happen to be risking their lives for their country?”

Others have cited the cost of Trump’s golf trips to Mar-a-Lago, or the amount the American military spends on erectile dysfunction drugs ($84 million in 2015, according to the Military Times).

But really, this isn’t about money.

This is about trading people’s lives and health for political gain, and no one watching this president should be surprised.

I was introduced to Morgenstern by Kathie Moehlig, the mother of a 16-year-old transgender son who founded the group TransFamily Support Services in San Diego.

Moehlig, whose son’s transition was followed for 10 months by journalists at The San Diego Union-Tribune, said she has been on the phone constantly since Wednesday — with trans service members, their parents, military people who are the parents of trans children and, of course, reporters.

The day of Trump’s abysmal tweet, she said, “our active duty service people were in panic, feeling like they were going to lose their jobs and be dishonorably discharged. Today, it’s more like how are we going to rally together for this fight, because everyone feels there is going to be a fight.”

Given Trump’s mercurial nature, it’s probably impossible to know what, exactly will happen. On Thursday, the chairman of the Joint Chiefs of Staff, Gen. Joseph Dunford Jr., said there would be no official change in policy unless the White House instructed the Defense Department to issue new rules.

Morgenstern, for her part, has always felt that military service was her destiny. Both her grandfathers were petty officers; her father was a captain in the merchant marine.

From the age of 10, she dreamed of serving her country. She dreams of one day attending officer school, becoming a submarine officer or a pilot, maybe even ending up at NASA.

While she’s shooting for the stars, her commander-in-chief is rolling around in the mud.