Sailor In Trouble After Filming Herself Refusing To Stand For Colors 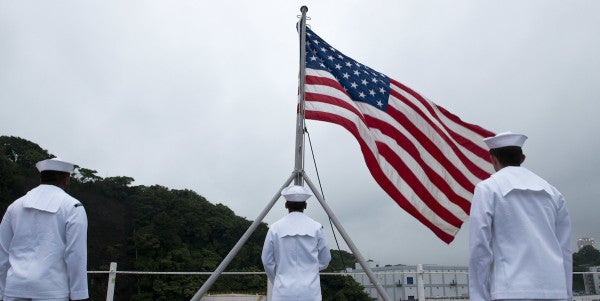 A sailor who filmed herself refusing to stand for morning colors is now facing administrative action, Military.com has learned.

Lt. Cmdr. Kate Meadows, a spokeswoman for Naval Education and Training Command, said actions were ongoing regarding the sailor, but declined to specify what they were.

The sailor, who has not been publicly identified, is assigned to Naval Air Technical Training Center in Pensacola, Florida, Meadows confirmed, and is expected to be allowed to continue training.

At issue is an eight-and-a-half minute video posted to Facebook in which the sailor sat through morning colors in protest of the now-defunct third stanza of the National Anthem, which she described as racist.

The video has been widely shared and was viewed more than 13,000 times after being re-posted to a military humor page, US Army Military Police WTF Moments.

The sailor referred to San Francisco 49ers quarterback Colin Kaepernick, who made headlines in August when he opted to take a knee for the anthem, saying he was not going to “show pride in a flag for a country that oppresses black people and people of color.”

“[The stanza] basically says land of the free, home of the brave, except for hirelings and slaves and I just can't support anything like that,” the sailor said. “I think Colin had a really good point when he said we had bodies in the streets.”

In the video, the sailor, who is dressed in civilian workout clothing near a Pensacola barracks building, expresses anxiety that other Marines or sailors will notice her filmed protest and confront her about it.

Military regulations require troops to stop in place, stand and salute during the brief ceremony.

“My heart is racing. This is not an easy thing,” she said.

While the anthem is played, the sailor sits on a picnic bench with a raised fist, a symbol of solidarity in the Black Power movement. When the anthem concludes, she expresses relief and pride in her protest.

“Today I actually did something, and it was small but significant for me,” she said. “Until this country shows they've got my back as a black woman … I can't, and I won't and I won't be forced to .”

While Kaepernick's flag protest was provocative, the sailor's is also against military regulations.

Navy rules state that troops must stand and face the flag when the National Anthem is played. Troops in uniform must salute, while troops not in uniform must stand at attention and place the right hand over the heart. These rules mean that her behavior could fall afoul of Article 92 of the Uniform Code of Military Justice, failure to obey a lawful general order or regulation.

In 2014, a soldier stationed at Fort Carson, Pfc. Tariqka Sheffey, posted a photo on Instagram showing herself hiding in her car to avoid the evening flag salute. The ensuing furor prompted an Army inquiry and concluded with a formal apology from Sheffey.

Meadows said she didn't know whether the Navy planned to publicly address the recent protest.

“We are always doing training to make sure that sailors know the pros and cons of using social media, and they must always observe appropriate conduct, and they're always subject to the UCMJ at all times,” she said. “We'll make sure that's reiterated to our sailors. Anything you post on social media can go viral.”