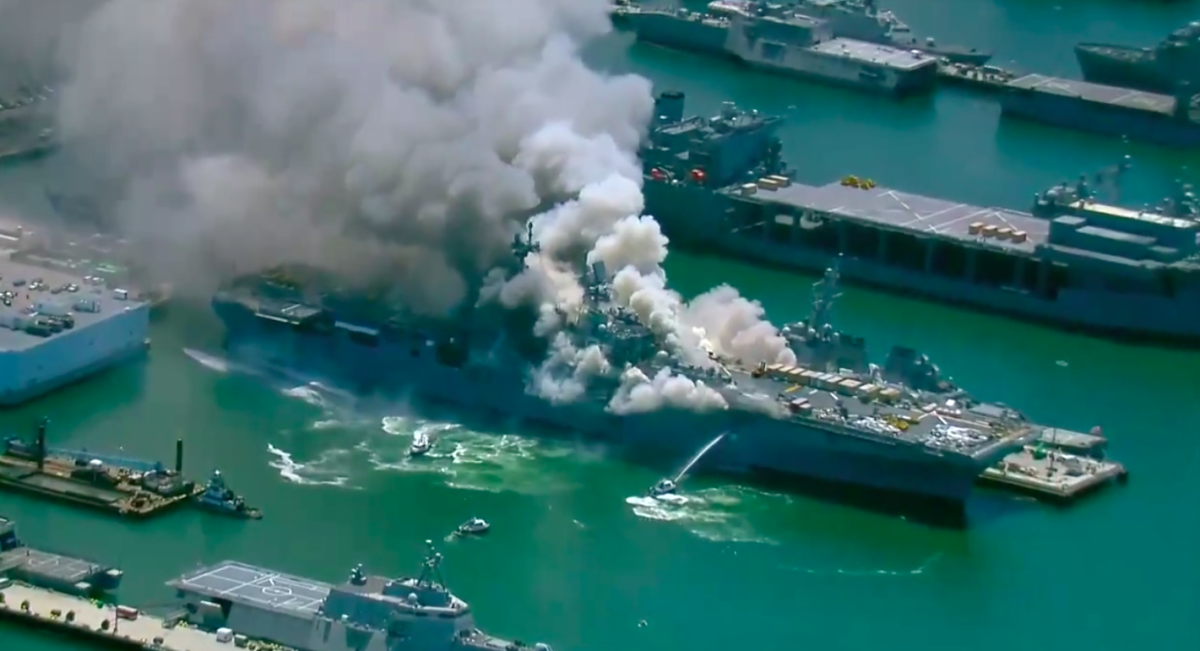 SAN DIEGO — At least two sailors from a U.S. amphibious transport dock have tested positive for the coronavirus after helping to fight this week’s fire aboard the amphibious assault ship Bonhomme Richard, the Navy said.

At least 27 people who were in contact with them are now quarantined.

The Navy’s statement on Friday came in response to questions raised by several sailors from the amphibious transport dock San Diego during interviews with The San Diego Union-Tribune. According to the sailors, at least five sailors from their ship have tested positive in the last few days.

The sailors spoke anonymously because they are not authorized to publicly comment on the matter.

The Navy confirmed that two of the sick were at the scene of the fire.

“Contract tracing identified 27 close contacts,” she said. “All contacts were placed in ROM (restriction of movement). The Navy continues to implement COVID-19 mitigation measures to protect the health of our force.”

The sailors from the ship said a significant number of the 27 “close contacts” work in the San Diego’s engineering department and include senior department personnel. The department has increased its staffing rotations to fill in gaps left by those under quarantine, the sailors said.

Citing privacy laws, Schwegman declined to comment on who is quarantined or in which department they work.

One sailor who helped fight the fire told the Union-Tribune Friday that the scene outside the Bonhomme Richard during the height of the conflagration was “chaotic,” and responding sailors routinely swapped and shared firefighting equipment, such as masks and gloves.

Photos provided by the Navy show firefighting equipment being washed and sanitized.

More than 400 sailors from 16 San Diego-based ships helped fight the fire, said Adm. Mike Gilday, the chief of naval operations, at a news conference Friday. Gilday was in San Diego touring the fire-ravaged ship and meeting with its leaders, sailors and firefighters who battled the blaze over five days.

According to the sailor who fought the fire, much of the Bonhomme Richard’s firefighting equipment was damaged or destroyed by the flames, so its sailors relied on gear brought from neighboring vessels — including the San Diego.

The Navy announced the fires were extinguished Thursday. The damage to the ship is “extensive,” Gilday said.

It has been a tumultuous few months for the Navy as it tries to balance its national defense mission with the need to keep sailors healthy amid a pandemic.

The San Diego-based aircraft carrier Theodore Roosevelt was sidelined in Guam for two months earlier this year as the virus spread to almost 25% of its 5,000-person crew, one of whom died. The subsequent firing of the Roosevelt’s captain by then-acting Navy Secretary Thomas Modly ignited a political firestorm that ended with Modly’s resignation days later.

The fate of the Bonhomme Richard is up in the air. Gilday said he believes the 22-year-old ship can be repaired but he isn’t sure it should be. A damage assessment is not yet complete.

Navy fire teams are expected to continue to rotate through the Bonhomme Richard throughout the weekend, doing fire watches and conducting further inspections, the sailors said.

Related: Photos show the damage sustained by the USS Bonhomme Richard during the fire