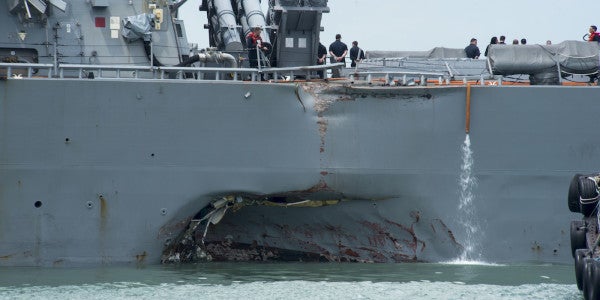 In the wake of two ship collisions within months of each other that claimed the lives of 17 sailors this summer, a three-star admiral was relieved, a four-star was passed over for command, and a number of other officers were removed from their posts.

But more serious personnel actions may be still to come and could include legal prosecution, as well as administrative moves.

On Thursday, the Navy released the results of a 60-day comprehensive review, blaming the two collisions on an array of factors, from insufficient training and experience to crew fatigue and a punishing operational tempo that damaged readiness.

But, said Adm. John Richardson, chief of Naval Operations, negligence was also a factor in the mishaps.

Richardson added that he had appointed Adm. Frank Caldwell, the four-star head of the Navy's Nuclear Propulsion Program, to be the consolidated disposition authority with regard to the crashes and personnel action.

Caldwell, he said, will “take a comprehensive look at all of these and … make his recommendations with respect to any further action.”

Vice Adm. Joseph Aucoin, the 7th Fleet Commander, was the first to be relieved immediately following the collision of the destroyer John S. McCainwith a Liberian-flagged tanker Aug. 21.

The commander and executive officer of the McCain, Cmdr. Alfredo Sanchez and Cmdr. Jessie Sanchez, were fired Oct. 11.

On Sept. 25, the four-star commander of U.S. Pacific Fleet, Adm. Scott Swift, announced he would retire after being denied a nomination to head U.S. Pacific Command in the fallout from the collisions.

Investigations into both collisions made public Wednesday paint a damning picture of errors in judgment and inattention to near danger.

Guided-missile destroyer USS John S. McCain (DDG 56) moored pier side at Changi Naval Base, Republic of Singapore following a collision with the merchant vessel Alnic MC while underway east of the Straits of Malacca and Singapore on Aug. 21.Photo via DoD

Aboard the McCain, the decision of Sanchez, the commanding officer, to transfer steering control to another station caused massive confusion and resulted in the helmsman reporting the ship had lost steering as it began an uncontrolled turn in a busy shipping lane.

In the case of the Fitzgerald, watchstanders were looking the wrong way as a merchant ship, the ACX Crystal, drew dangerously close, and the officer of the deck badly miscalculated the ship's trajectory, concluding that it would pass 1,500 yards away. The officer of the deck also froze as disaster grew imminent, making a command and then rescinding it as the ship continued at full speed on its collision course.

Could these failings result in charges under the Uniform Code of Military Justice?

It's possible, said Brian Bouffard, a former Navy JAG officer with two decades of experience as a criminal trial lawyer.

“[Charges could include] hazarding a vessel,” he said. “It could be any number of orders violations, if they could show that somebody violated existing orders that could have applied. Depending on interviews that they have conducted, they may be able to prove false official statements. Those are the ones that immediately leap to mind.”

As the consolidated disposition authority, Caldwell has the right to make recommendations up to and including general court-martial for any personnel found at fault, Bouffard said.

The charge of hazarding a vessel is considered a capital offense under the UCMJ. But to be convicted, it must be proven that the act to endanger a U.S. military vessel was intentional. Other, lesser charges, such as violations of standing orders, might be easier to prove.

Though rare, the option to charge a Navy officer in the wake of a tragic mishap has been exercised before.

When the Portland-class cruiser Indianapolis was sunk by a Japanese submarine in 1945, resulting in massive loss of life, the ship's commander, Charles B. McVay III, was made to face court-martial. Navy officials alleged McVay failed to zigzag to make the ship a harder target for the enemy and did not give the order to abandon ship soon enough.

The Japanese submarine commander who sank the ship was called upon to testify in McVay's defense during the court-martial. Ultimately, McVay was convicted of failing to zigzag and lost some seniority. In 2000, however, Congress would pass a resolution exonerating him.

More recently, the Navy handed out punitive letters of reprimand and non-judicial punishment to a number of sailors in 2016 after two riverine boats strayed into Iranian waters, and 10 sailors were briefly held captive by the Iranian Revolutionary Guard Corps Navy. The incident was quickly resolved, but proved an embarrassment to the Navy and highlighted failures of leadership and planning.

At a Pentagon press conference Thursday, Richardson was asked whether he believed he had the confidence of the Navy to continue as chief of naval operations in light of the failures in training, operations and readiness that have occurred on his watch.

“I feel responsible for this,” Richardson said, but maintained he could remain in his position with the confidence of the fleet behind him.