If you're deployed aboard the carrier John C. Stennis and consider yourself a practitioner of Norse paganism, you're in luck 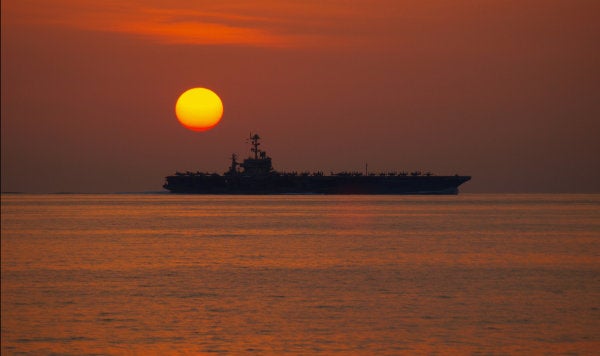 If you're deployed aboard the carrier John C. Stennis and consider yourself a practitioner of Norse paganism, you're in luck. The carrier, now operating in the Persian Gulf, is holding lay services in the ship's chapel to serve a “small, committed” group of sailors identifying as Heathens, according to a recent news release from the carrier.

The development is the latest in a series of boosts for Heathenism in the U.S. military, a little-known religion with roots in Viking mythology that has gradually gained recognition in the services. A 2013 non-scientific “census” poll by the Norse Mythology Blog identified nearly 8,000 Heathen respondents in the U.S. and more than 16,000 worldwide. A 2018 estimate from religious author Jefferson Calico suggested there may be up to 20,000 American Heathens.

According to the Stennis release, Aviation Electrician's Mate 2nd Class Joshua Wood, a practitioner of Heathenry for more than five years, was appointed Heathen lay leader for the carrier. This distinction allows him to facilitate sumbels, or informal Heathen religious services, within the ship's chapel.

Religious lay leaders must be appointed by commanding officers “on the basis of volunteerism, high moral character, motivation, religious interest and a letter of certification by the appointee's religious organization,” according to the release, which cites the Military Personnel Manual.

While the release did not state how many sailors are regularly joining Wood for services, it includes quotes from one other Navy practitioner, Aviation Electronics Technician Airman Joshua Shaikoski.

Shaikoski was born in Norway, where Heathenism originated, but grew up Lutheran, he said.

“I never felt like I connected with anything spiritual until I visited Norway and discovered a group of Heathens who opened my eyes to their religion,” he said in a statement. “When I returned to , I met a kindred that aligned with my beliefs, and I've been with them ever since.”

Deployed at sea since October, Heathens aboard the Stennis pray to Njord, the god of seafarers, one of many deities recognized by the religion, Shaikoski said. He added that rumors of practices such as animal sacrifice are not credible.

“Heathenry helped me connect with people on the ship that I would have just passed by,” he said.

While Christianity remains the most common religious affiliation for service members, the military has taken steps to become more pluralistic in recent years. In 2017, the Pentagon more than doubled its list of recognized religionsto 221, compiling faiths already recognized by various service branches into a master list.

Heathenry, in particular, has seen a number of advances in the military. In 2013, Arlington National Cemetery approved the Hammer of Thor, or Mjölnir, as an accepted religious symbol to adorn military headstones. Mjölnir is a popular religious symbol for Heathens.

In 2018, a soldier was granted a grooming standards waiver in order to wear a beard to symbolize his Norse Pagan faith.

by the hammer of thor
heathenism
heathenry
lifestyle
mandatory fun