Believe it or not, writing ‘SOS’ in the sand when you’re marooned on an island actually works

After a group of mariners became stranded on a deserted island in Micronesia, they scrawled out a gigantic "SOS" in the sand and hoped for the best. As it turns it out, that's a pretty good way to get spotted by rescuers 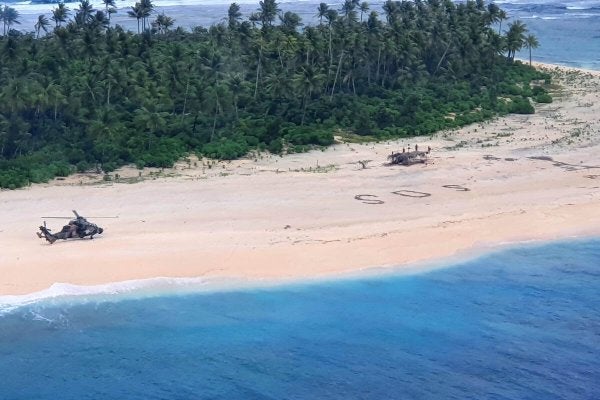 After a group of mariners found themselves stranded on a deserted island in Micronesia, they did the only thing one can do in that situation: scrawl out a gigantic “SOS” in the sand and hope for the best.

As it turns it out, that's actually a pretty good way to get spotted by rescuers:

After the sailors departed the Puluwat Atoll on July 29 for what should have been a 25-mile journey in their blue and white skiff, they reportedly went off course and ran out of fuel, the New York Times reports.

However, when they failed to make it to their destination at Pulap, Chuuk — another island in the region — they were reported missing and a joint rescue operation involving the U.S. military, Australian military, and the Federated States of Micronesia was launched.

Days later the mariners were spotted on Pikelot Island on Aug. 2 more than 120 miles from their point of departure, according to Australia's Department of Defense.

The stranded sailors were spotted by a U.S. Air Force KC-135 Stratotanker, which took off from Andersen Air Force Base in Guam with a crew of Hawaii and Pennsylvania Air National Guard members.

Nearly three hours into their search, and flying at roughly 1,500 feet, the KC-135 crew spotted the sailors on the small deserted island, one of the many outer islands that makes up the state of Yap in Micronesia.

“We were toward the end of our search pattern,” U.S. Air Force Lt. Col. Jason Palmeira-Yen, the KC-135 pilot, said in a recent Department of Defense press release. “That’s when we looked down and saw an island, so we decide to check it out and that’s when we saw SOS and a boat right next to it on the beach.”

“From there we called in the Australian Navy because they had two helicopters nearby that could assist and land on the island,” said Palmeira-Yen, according to Stars and Stripes.

As the KC-135 was circling overhead, the HMAS Canberra with the Royal Australian Navy launched its helicopters to assist with the rescue operation.

Photos from the Australian military show a Tiger attack helicopter on the beach after the crew touched down to provide food and water for the marooned mariners. And according to Stars and Stripes, a U.S. Coast Guard HC-130 Hercules airdropped a radio to let the sailors know that a patrol boat from Micronesia was en route to pick them up — which it did on Monday.

“In particular, our embarked MRH90 helicopter from No. 808 Squadron and four armed reconnaissance helicopters from 1st Aviation Regiment were instrumental in the morning search that helped locate the men and deliver supplies and confirm their welfare,” said Capt. Terry Morrison, the commanding officer of the Canberra, which had diverted course from its return trip to Australia in order to join the search and rescue mission.

“I am proud of the response and professionalism of all on board as we fulfil our obligation to contribute to the safety of life at sea wherever we are in the world,” Morrison said.

As for how the rescue operation came together so smoothly, Capt. Christopher Chase, the commander of Coast Guard Sector Guam, attributed it to “partnerships.”

“This is what made this search and rescue case successful,” Chase said. “Through coordination with multiple response organizations, we were able to save three members of our community and bring them back home to their families.”