"In terms of units that are affordable to sailors, we have an absolute shortage." 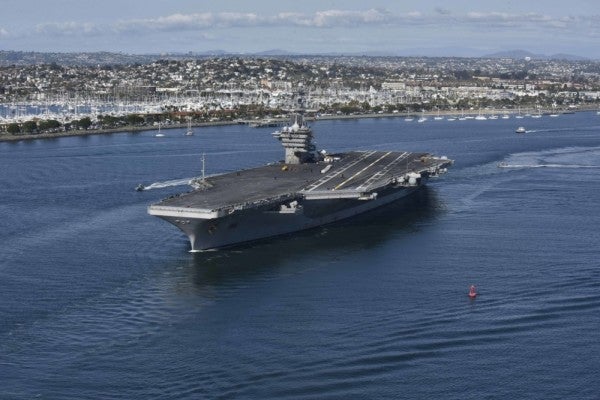 San Diego is poised to become the home port of three Nimitz-class nuclear aircraft carriers in 2020, tripling the carrier footprint in the region and bringing a $1.6 billion per year boost to the local economy.

The additional ships and the roughly 3,000 sailors attached to each will bring additional strain to an already tight housing market and may threaten more traffic on the already congested city of Coronado streets, Interstate 5 and the San Diego-Coronado Bridge.

Currently only the Theodore Roosevelt is based in San Diego. However, that will soon change, as the Abraham Lincoln arrived in San Diego today , after completing a record-setting 10-month around-the-world deployment. And the Carl Vinson, which is undergoing maintenance in Bremerton, Washington, will be returning to San Diego this summer.

According to the 2019 San Diego Military Economic Impact Study, each aircraft carrier based in San Diego generates up to $800 million in gross regional product. Mark Balmert, a retired rear admiral and the executive director of the San Diego Military Advisory Council, compares to a new company bringing thousands of jobs to San Diego.

“We're all the way down to one (carrier), so to go up to three, it's a big impact,” Balmert said. “If it were a company opening with several thousand people, it would be big news — they buy homes, rent places to live and buy cars.”

“The market is very constrained right now,” London said. “Occupancy in San Diego County is at 95 percent. In terms of units that are affordable to sailors, we have an absolute shortage. They're not profitable for builders to build them.”

Much of the new housing in the county, according to London, is built for the upper-end of the market.

“It puts a measurable strain on the San Diego housing market when (sailors) come in, and we haven't really stepped up as a local economy to fully accommodate the demand,” London said.

Along with the strain on the housing market, two more carriers — and the thousands of daily commuters that come with them — will strain the roads in and out of Coronado. Kevin Dixon, a spokesman for Naval Air Station North Island, said the Navy had a plan to alleviate some of the traffic.

“The Navy will implement the staggering of carrier work day start times when two carriers are in port,” Dixon said in an email. “In addition, the Navy has agreed to explore funding options and road improvements at four intersections (and) will continue to subsidize transit and vanpooling for military and civilians working on the base.”

North Island has not seen three carriers at the base since 2010, when the Carl Vinson, Ronald Reagan and Nimitz were all stationed there, said Cmdr. Ron Flanders, a Naval Air Forces spokesman.

Nimitz-class carriers have a service life of 50 years. The Navy frequently shifts carrier home ports as the ships require extensive and periodic maintenance, including a one-time mid-life overhaul in Virginia, where their nuclear reactors are refueled.

The Navy announced in 2018 that the Abraham Lincoln would shift its home port to San Diego after its own mid-life refuel and overhaul in Virginia. It left for deployment on April 1, 2019 but was held on-station in the Middle East after the carrier Harry S. Truman, its relief, experienced an unspecified electrical failure that required three months of repair.

The Lincoln finally left the Middle East in December. It is the longest carrier deployment in the post-Cold War era, according to the Navy. Rep. Scott Peters, D-San Diego, announced on Twitter on Jan 8 that the Carl Vinson would be returning to San Diego. The Navy confirmed it will return to San Diego this summer.

It might be awhile, however, before all three carriers are home at the same time. The Roosevelt left San Diego Friday for a western Pacific deployment the Navy says will be at least seven months.