A San Diego Navy sailor and his girlfriend were arrested on suspicion of child abuse and torture after his malnourished... 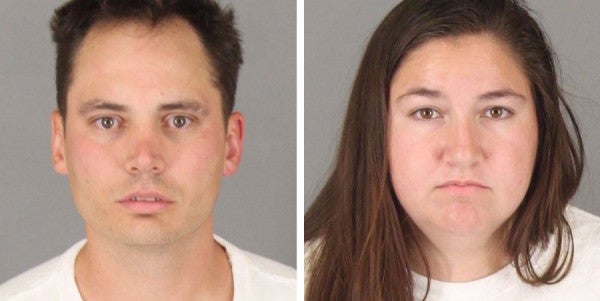 A San Diego Navy sailor and his girlfriend were arrested on suspicion of child abuse and torture after his malnourished 5-year-old son was found gravely injured in their Murrieta, California home Tuesday, authorities said.

Police and medics responding to a 911 call about a child in need of medical aid found the boy suffering from severe injuries and malnutrition in the house on Verdun Lane, east of Interstate 15, about 10 a.m. Tuesday. The boy was airlifted to a hospital in San Diego County, Conrad said in a statement.

Police later served a search warrant at the home, where they encountered “extremely unsanitary” living conditions, Conrad said, adding that animal control officers removed 11 dogs, four cats and two fish from the house. Feces and urine were found throughout the home.

Johnson, according to her Facebook page, fosters dogs for an animal rescue organization.

Conrad said evidence in the home and statements from Whitten and Johnson led detectives to suspect the couple is responsible for the boy’s “dire condition.”

Whitten’s Facebook page is peppered with photos of him and his son — taken at a Naval base, petting zoo, playground and in their home.

On multiple occasions, Whitten took to Facebook to laud Johnson as a great co-parent and express his gratitude toward her. In Oct. 27, 2015, he wrote: “Jeryn, it's been so amazing to watch Feno's love for you grow. I love seeing him follow you around, telling you he loves you most. You're doing a great job raising him. I know it's not easy sometimes. Thank you.”

Following the news of the arrests, scores of people flooded Whitten and Johnson’s Facebook pages with ruthless comments about the alleged abuse.

The Los Angles Times contributed to this report.