Officials said the decision to surrender the two pieces of equipment — a $658,000 armored vehicle and a $50,000 Humvee — was made “in order to maintain the trust and confidence the community has for the Santa Fe Police Department.” 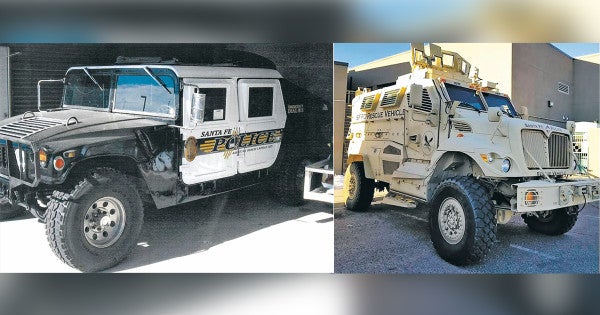 Santa Fe police are giving up a pair of muscle vehicles handed down from the Department of Defense amid nationwide calls to demilitarize law enforcement agencies.

Officials said the decision to surrender the two pieces of equipment — a $658,000 armored vehicle and a $50,000 Humvee — was made “in order to maintain the trust and confidence the community has for the Santa Fe Police Department.”

“The current concerns and perception from the community that the vehicles are ‘militarized’ in nature led to a review of the equipment [from the Department of Defense] and a determination that we can and should dispose of the two vehicles,” the police department said in a statement Thursday.

Chief Andrew Padilla, a former Marine, on Wednesday night revealed the decision to return the beefed-up — but little-used — vehicles to New Mexico’s homeland security department and the federal Defense Logistics Agency. He spoke about the plan during a City Council meeting after several residents urged the governing body to defund the police department.

City Councilor Michael Garcia questioned whether “any resources” in the Santa Fe Police Department’s budget were “being put forth towards what would be considered the militarization of our police force.”

In his answer to Garcia, Padilla said in an effort to demilitarize the department, “We will be returning those two items.”

Mayor Alan Webber jumped into the conversation and said the department was “in fact demilitarizing by returning those vehicles.”

“In effect, there is a reduction in what people might regard as equipment that came from the Department of Defense or other military sources,” Webber said. “If folks are raising the question with what’s going on around the country — and we’re part of what’s going on around the country — we need to step up and be counted. Our police department is reducing that profile, not increasing it.”

The two vehicles, obtained under the so-called 1033 Program run by the Law Enforcement Support Office of the Defense Logistics Agency, have been used mostly for promotional and recruiting purposes.

“During the time the police department has had the [armored vehicle], it has been used a handful of times between community events and SWAT search warrants/arrest warrants,” Kristine Mihelcic, the city’s constituent and council services director, wrote in an email. “Usage stats are not available for the [Humvee], but it was used at various community events. Per Chief Padilla, it has been a few years since it was last used.”

City Councilor Chris Rivera said he remembered the city receiving “quite a bit of equipment” in either 2002 or 2003 after the Oklahoma City, Okla., bombing in 1995, the Columbine High School massacre in 1999 and the Sept. 11, 2001, terrorist attacks.

“I remember PD having that equipment out in front of City Hall before a council meeting and many of those council members going outside and aahing and oohing about the new equipment we received from the military, and what I want to do now is just caution us about being reactionary to things that are going on in society right now,” said Rivera, a former city fire chief.

“I don’t want to be here 20 years from now wishing that we hadn’t done things based on things that were happening at the moment,” he added. “I think that’s kind of where I feel like we’re at now after Sept. 11 is that we probably shouldn’t have received that equipment. We shouldn’t have been outside oohing and aahing over that military equipment, but it’s hard to see that when you’re in the moment.”

City Councilor Renee Villarreal said she wouldn’t support the police department acquiring such equipment in the future, including from grants the city obtains from the state Department of Homeland Security and Emergency Management, which she said “creates more militarized equipment.”

“I’m not going to approve anything that has to do with what I consider toys that are unnecessary equipment that I don’t think actually helps our police force have a stronger presence, a community presence,” she said. “I just want to make that point that I’ll be looking at those closely when they come through — if they come through.”