A congressional candidate running to represent a district with the West Coast’s largest Marine Corps base is under fire for... 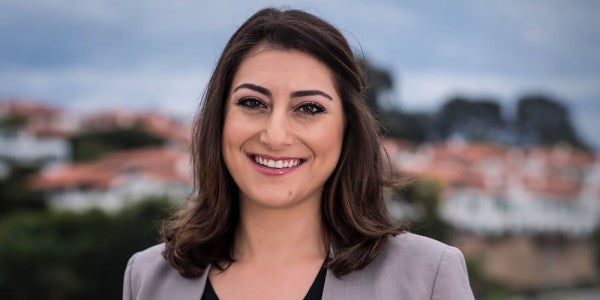 A congressional candidate running to represent a district with the West Coast’s largest Marine Corps base is under fire for comments she made about a “crusty old Marine,” when several of her opponents are veterans.

In a profile in Cosmopolitan magazine, Democrat Sara Jacobs, 28, of Encinitas, told an audience member at a campaign event, “It's true. I'm not a crusty old Marine,” when asked about the district’s large military population.

The magazine placed the comments in the context of a question by an audience member about candidate Doug Applegate, 64, of Vista, who was commissioned in the Marine Corps in 1974 and deployed in both the Gulf War and Operation Iraqi Freedom. Applegate, also a Democrat, served both on active duty and as a reservist before retiring in 2006 as a colonel.

Jacobs’ campaign told The San Diego Union-Tribune that she didn’t mean any offense, and that the article took her statement out of context. According to her campaign, she was repeating language used by the questioner.

“This comment was made to someone who jokingly referred to himself as a ‘crusty old Marine’ and then taken out of context. If any Marines are offended, I truly am sorry,” Jacobs said in a statement from her campaign.

Cosmpolitan told the U-T it stands by its account.

Applegate was traveling and not available for comment on Wednesday, but other Democrats in the race blasted Jacobs for her remarks.

“As somebody who proudly served our country and risked life and limb to defend our nation and our families, I believe that no candidate for public office should attack our service members,” Christina Prejean, an Air Force veteran, said in a statement. “We serve because of our innate passion to protect our country. We should never tear down veterans.”

Prejean left the military as a captain after six years in uniform and now works as a lawyer representing service members and veterans who were sexually assaulted while on duty.

Ashley Hayek, the president and CEO of a firm that raises money for Republicans, also attacked Jacobs for her comment.

Parke Skelton, a consultant for another Democratic candidate, attorney Mike Levin, tweeted that Jacobs’ comment “Seems like a devastating error in this district.”

The 49th Congressional District being vacated by Rep. Darrell Issa, R-Vista, is military-centric and includes Camp Pendleton, the largest Marine Corps installation on the West Coast. The boundaries include adjoining cities that active-duty service members and veterans have made their home. Spanning from La Jolla to Dana Point, Census data show that that about 8.6 percent of the adults in the district are veterans and another 6.6 percent of the labor force is in the military.

Many of the candidates Jacobs is running against are veterans. Besides Applegate and Prejean, Democrat Paul Kerr served 10 years in the Navy, while Assemblyman Rocky Chávez, R-Oceanside, joined the Marine Corps in 1973 and retired in 2001 as a colonel. The incumbent, Issa, served in the Army both as an enlisted soldier and later as an officer. Issa is not running for re-election.

Understanding the military and the needs of military families is a major part of representing the area around Camp Pendleton, Chávez said. He’s tried to assist military families to send their kids to California colleges, or to get young children any special help they need at school if one of their parents is deployed.

“When you start talking to military families in Vista, Carlsbad, Oceanside and San Clemente, when you talk about children and deployments and schools, they get it,” Chávez said.

Jacobs’ campaign had supporters who are veterans call the Union-Tribune. One, Danny Jackson, said he wasn’t at the event where Jacobs referred to Applegate as a “crusty old Marine,” but doesn’t think that Jacobs meant anything malicious by her comments.

“I can say that based on my interactions with Sara and the time I’ve known her, that she has not had anything negative or derogatory to say about veterans,” said Jackson, who served in the Army from 1960 to 1970.

He said he supports Jacobs because of her positions on veterans. He said she doesn't want to privatize veterans healthcare and that she wants to make sure veterans services are funded and military families are supported.

Another supporter suggested by the Jacobs campaign, William Rider, is a Marine Corps veteran who served from 1967 through 1969. He said that he wasn’t at the event, but he doesn’t think Jacobs was attacking Applegate’s military service or veterans, and that she has previously assisted military families. One time she got involved with a toy drive, Rider said.

“She posed with some veterans’ kids when we were giving them toys,” Rider said. “She just jumped right in. That’s what we need in this country.”