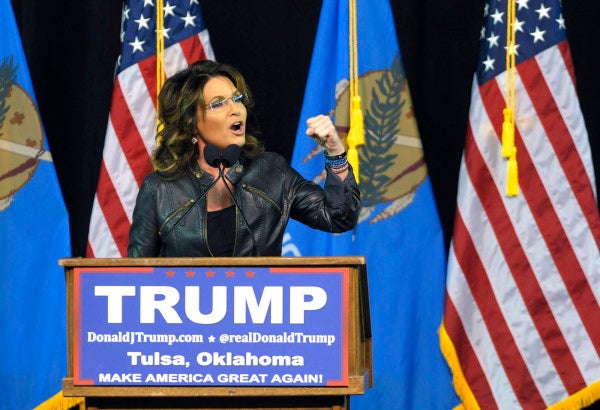 Palin served as governor of Alaska from 2006 until her resignation in the summer of 2009. She was the Republican Party nominee for vice president of the United States in the 2008 election, running alongside Sen. John McCain.

Palin would be the first secretary of the VA since it became a cabinet-level agency in 1989 to have never served in the armed forces. She does, however, come from a military family. Her oldest son, Track, served in the Alaska National Guard with the Army's 1st Stryker Brigade Combat Team, and was deployed to Iraq for much of the 2008 presidential election.

In January 2016, when Track was arrested for domestic violence against his girlfriend, Palin, campaigning for Trump in Iowa, attributed it to a failure by President Barack Obama to take care of veterans with post-traumatic stress disorder.

RELATED: Army Vet Shuts Down Palin’s Claim That Her Son’s Violent Behavior Is Due To PTSD »

“When I talk about a commander-in-chief who will never leave our men and our women behind, let me get a little bit personal on this,” she said, calling Track’s arrest the “elephant in the room.”

Her daughter, Bristol, is married to former Marine Sgt. Dakota Meyer, the first living Marine from Iraq and Afghanistan to earn the Medal of Honor, the nation’s highest award for valor in combat.