It turns out that the $110 billion Saudi Arabia arms deal that the Trump administration announced in May is actually “fake... 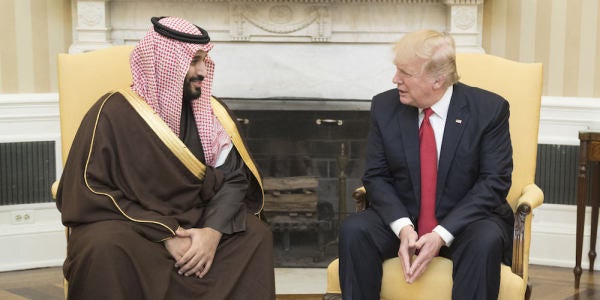 It turns out that the $110 billion Saudi Arabia arms deal that the Trump administration announced in May is actually “fake news,” according to the Brookings Institution.

Bruce Riedel, a senior fellow and director of the Brookings Intelligence Project, writes that everyone with whom he has spoken in the defense industry and on Capitol Hill says that the supposed $110 billion deal is actually “a bunch of letters of interest or intent, but not contracts.”

In fact, a lot of these proposals, which the Pentagon calls “intended sales,” are just arms that defense contractors speculate that the Saudis might want at some point. Many were even proposed during the Obama era.

For example, the Pentagon proposed to sell the Saudis four frigates for $11.25 billion in 2015, but since then, no contracts have been signed.

Same thing with the THAAD systems. The Saudis have wanted missile defense systems for awhile, and Obama even approved such a sale in 2015, but nothing has been signed.

Riedel suggests that the Saudis probably can't even afford such a huge deal at this point, since they are struggling with low oil prices and trying to pay for the war in Yemen.

He also said that one way to glean that the “deal is real” is when Israel wants a deal of their own, since the Israelis will want to keep their edge over their Arab neighbors. When former Defense Secretary Bob Gates closed a $112 billion arms deal with Saudi Arabia in 2012, he also had to negotiate a separate one with Israel to get it through Congress.