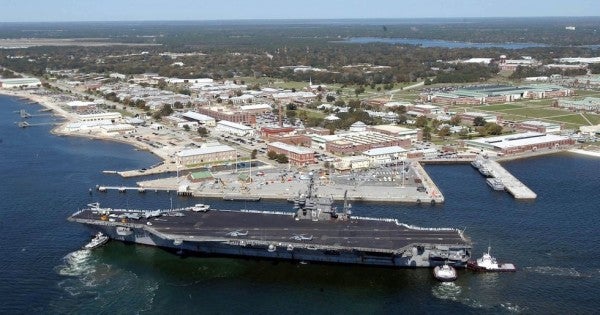 PENSACOLA, Fla. (Reuters) – U.S. investigators face mounting pressure on Monday to deliver answers on the motive that led a Saudi Air Force lieutenant to shoot and kill three people and wounded eight others at a U.S. Navy base in Pensacola, Florida.

Florida Governor Ron DeSantis, speaking at a Sunday evening press conference, said he was sure the gunman carried out an act of terrorism. He questioned whether it could have been prevented by better vetting of foreign military officers who train in the United States.

“There is a lot of frustration in our state over this,” DeSantis said. “You have foreign military personnel coming to our base. They should not be doing that if they hate our country.”

The FBI said it thinks that the shooter, Second Lieutenant Mohammed Saeed Alshamrani, 21, acted alone when he opened fire inside a classroom at the base early on Friday morning.

The bureau said it was not ruling out labeling the violence as an act of terrorism, but that it still had many people to interview on Monday and was still collecting evidence at what it called an active crime scene.

The New York Times reported late Sunday that it had reviewed an official complaint Alshamrani lodged in April against an instructor at the base who had made derogatory comments about his appearance, but that there was no apparent connection between that incident and the shooting.

The FBI confirmed on Sunday that Alshamrani had legally purchased somewhere in Florida the Glock 9mm pistol he used in the shooting. DeSantis said he was able to buy the firearm because of a “federal loophole” in gun laws that allow nonimmigrant foreign nationals to purchase weapons for an array of reasons, including if they simply have a hunting license.

“I'm big supporter of the Second Amendment, but it's so Americans can keep and bear arms, not Saudi Arabians,” the governor told reporters.

Alshamrani was on the base as part of a U.S. Navy training program designed to foster links with foreign allies. He had started training in the United States in 2017 and had been in the Pensacola area for the past 18 months, authorities said.

His fellow Saudi students were speaking directly with American investigators and were restricted to the base on order of the Saudi military, Rojas said.