‘I Saw It Coming,’ Says Iraq Vet Of ISIS’ Rise 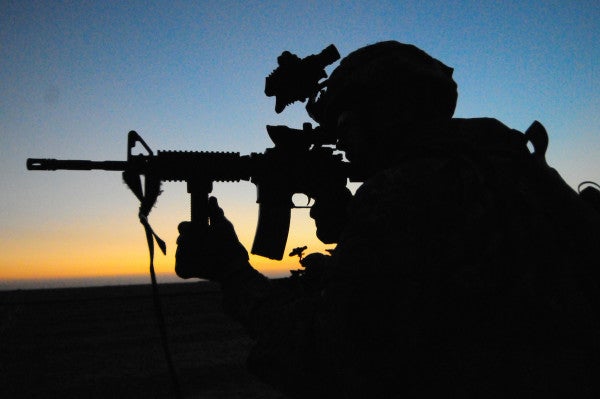 A key air base in Northern Iraq that will house American troops and play a role in helping the Iraqi army retake its second largest city from Islamic militants is well known to a group of Central Valley soldiers who served there in the late days of the Iraq War.

“I saw that and thought, ‘I was just there,’” said Sgt. 1st Class Daniel Clemons, 39, of Sacramento.

He’s referring to Qayyarah West Airfield, a sprawling air base in open desert that sits about 40 miles south of Mosul. The Islamic State group has held Mosul for the past two years and the Iraqi army is preparing to retake it, according to Defense Secretary Ash Carter.

The airfield, known as Q’West to American soldiers who can’t pronounce its Arabic name, also will serve as a hub to several hundred U.S. military personnel who are assisting Iraqi troops. The Iraqi army regained control of the air base over the weekend.

“With the retaking of Qayyarah West airfield, the Iraqi security forces have once again demonstrated a serious will to fight,” Carter said in a news release. “I congratulate them on their recent successes and reaffirm that the United States, along with our coalition partners, will continue to do all we can to support Iraq's effort to serve ISIL a lasting defeat.”

California National Guard soldiers from the Modesto-based 1st Battalion, 184th Infantry Regiment spent most of 2009 at Q’West running supply convoys to American-held forward bases in Mosul and along Iraq’s borders with Syria and Turkey.

The Islamic State swept through much of that territory in 2014, expanding its footprint from Syria into western and northern Iraq. The group also seized American weapons that the Iraqi army had kept in bases around Mosul and in Q’West.

Clemons watched the Islamic State’s advance that year and felt saddened, particularly when it moved into Kurdish-majority provinces that were friendly to American troops.

The Islamic State “made them refugees again, and it’s frustrating to see that,” he said of the Kurdish and Christian communities in northern Iraq that suffered under Saddam Hussein’s regime.

McClatchy visited the 1-184th at Q’West in early 2009, when soldiers there expressed optimism because they were experiencing far less violence than they saw on previous deployments. Many of them lived in cities from Redding to Fresno, and were serving on their second or third deployments.

“It’s going in the right direction,” Capt. Guillermo Adame told McClatchy at Q’West in 2009. “Within a few years, this will all change. We won’t be here, or if we are, it'll be a small footprint.”

U.S. forces departed Iraq in December 2011, when the Obama administration and Iraq’s former prime minister could not reach an agreement to keep American troops in the country. Today, about 4,600 American troops are reported to be stationed in Iraq. They mostly work as advisers to Iraqi forces, or serve in artillery and aviation units that can attack Islamic State positions from a distance.

Like many American soldiers in Iraq in the late years of the war, soldiers from the National Guard unit at Q’West found themselves often restricted to their base rather than outside the wire on patrols. In some cases, they felt bored or wanted to be more assertive.

“It was surprisingly quiet,” said Jeremy Calgaro, a former Patterson resident who has moved out of state since leaving the National Guard as a sergeant. “I wish they would’ve utilized us better than they did. You had a hard-nosed unit that could have got a lot done.”

Although both Calgaro and Clemons said they felt for hopeful for Iraq’s future when they talked to a reporter at Q’West in 2009, they said they were not surprised that Iraq’s government lost that ground to the Islamic State after American troops left the country.

They noticed simmering tensions between Iraq’s different religious and ethnic groups despite the lull in violence of their last deployment there.

“I saw it coming,” Calgaro said. “We knew about ISIS long before ISIS came out.”

“We went. We did our jobs and then we just gave up the ground and went away,” he said.

Looking back, Clemons said he prefers to think about the days he and other soldiers made a small difference in someone’s life rather than dwelling on the scope of the war. He served on three deployments to Iraq and one to Afghanistan in his Army career.

“It was the little wins, like ‘Wow, we opened a school today.’ Or, the elections went stellar. You have to take those little wins, because if you think about the big stuff you’ll got nuts,” he said.