The Navy plans to phase out its blue-and-gray camouflage uniform that was widely mocked for hiding only sailors who fell... 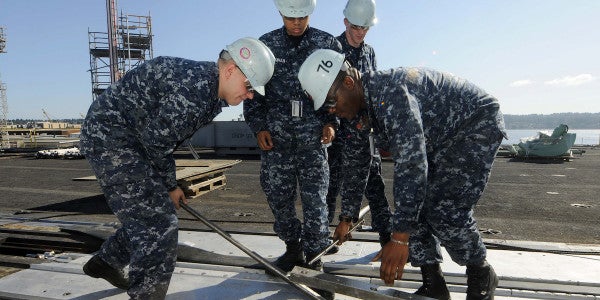 The Navy plans to phase out its blue-and-gray camouflage uniform that was widely mocked for hiding only sailors who fell overboard and needed to be rescued, the service announced Thursday.

The Navy beginning Oct. 1 will transition to a green camouflage uniform that’s worn by expeditionary forces like SEALs, making it the standard throughout the service.

It will take three years to completely phase out the blue-and-gray uniforms, officially called Navy Working Uniform Type I and unofficially referred to as “blueberries.”

The woodland camouflage uniforms have a reputation for being more comfortable than the blue-and-grays, and sailors frequently requested to wear the former during all-hands call meetings with the Navy’s top leaders.

“As the CNO and I travel to see Sailors deployed around the world, one of the issues they consistently want to talk about are uniforms,” Navy Secretary Ray Mabus said in a statement. “They want uniforms that are comfortable, lightweight, breathable … and they want fewer of them. We have heard the feedback and we are acting on it.”

Other uniform changes also are coming. The Navy will transition to a black cold-weather parka starting Oct. 1, 2018, as outerwear with the service and service dress uniform, the Navy said. That means the Navy all-weather coat, peacoat and reefer coat will become optional items. The mandatory implementation date for the parka is Oct. 1, 2020.

The Navy said the uniform and outerwear changes will cost $180 million over five years.

The Navy said sailors will be able to buy the green camouflage uniforms for personal wear through the Navy Exchange and call centers once there is enough inventory available. The Navy said it is developing an incremental regional fielding plan to phase in the new uniforms while allowing sailors to get their money’s worth out of their existing ones.

The Navy will cover the cost of the new uniforms for enlisted personnel, but officers will have to pay out of their own pockets, as required by law. Officers are given a $400 uniform stipend at the beginning of their careers.