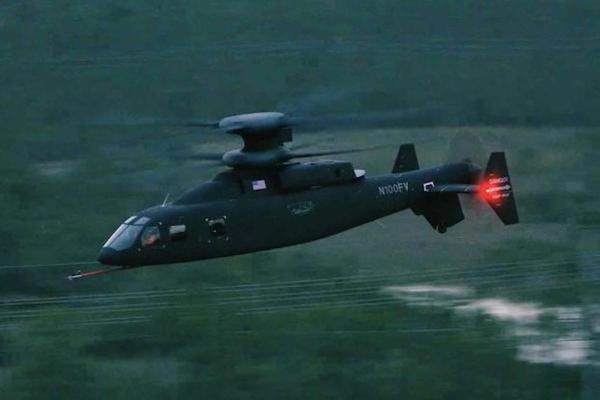 A Sikorsky-Boeing team announced today that the experimental helicopter prototype competing to replace the Army's UH-60 Black Hawk has completed a flight at nearly 205 knots, or 236 miles per hour, and is just months away from exceeding 250 knots, nearly 290 mph.

The SB-1 Defiant prototype is currently competing against the V-280 Valor prototype, developed by Textron Inc. and Bell, in the Army's Future Long Range Assault Aircraft (FLRAA) effort. That competition is part of the larger Future Vertical Lift endeavor to equip the Army with faster, longer-range helicopters beginning in 2030.

“We are really proud of this milestone and what our team has achieved,” said Jay Macklin, director of Future Vertical Lift Business Development for Sikorsky. “Exceeding 200 knots is significant also because it's beyond any conventional helicopter's speed.”

Sikorsky, which is owned by Lockheed Martin Corp., and Boeing Co., built the Defiant after the Army awarded the team a contract in 2014 as part of the Joint Multi Role Technology Demonstrator (JMRT-D) program.

The Army also awarded a contract to a Textron-Bell team, which built the V-280 Valor, a tiltrotor-design helicopter that completed its first test flight in December 2017.

The Defiant's test flight at 205 knots “is just a number, but it's a number that you are not typically accustomed to hearing with respect to a helicopter,” Bill Fell, a former Army aviator and test pilot in the Defiant program, said.

“When I started as an Army aviator in the old [OH-58] Kiowas and [AH-1] Cobras, you were [flying] at 100 knots; then we graduated to Blackhawks and Apaches and it's 130 to 140 knots,' he said. “We went 205 knots with less than 50% of the installed prop power, so expect a lot more in the future, because we had a lot more prop power to apply to this machine.”

The Defiant was designed to fly at a minimum speed of 230 knots, “so we will go well in excess of that, in excess of 250 knots,” Fell said.

“It's not weeks, it's not years, it's probably in the order of a few months before we get out to maximum speed,” Fell said. “It's hard to say because it's all based off of success here on the test bed.”

The Defiant program has spent many hours testing the engine and other systems on the ground in a special test stand designed to collect data and predict how the prototype will perform during flight.

“I think the key takeaway is, we are seeing exactly the performance our analytical tools have predicted; this gives even greater confidence as we continue to expand the speed envelope and maneuvers of Defiant,” Macklin said.

In March, the Army awarded competitive agreements to Bell Textron Inc. and Sikorsky Aircraft Corp. to continue into the Competitive Demonstration and Risk Reduction (CD&RR) phase of the FLRAA program. The CD&RR effort is scheduled to last until 2022, the year the Army plans to select one vendor to eventually produce FLRAA.

Randy Rotte, director of business development for Boeing Cargo Helicopters and Future Vertical Lift, said he is confident that Defiant will give aviators what they need to survive in the “most lethal and complicated battlefields today and in the future.”

“The survivability through the low-level high-speed maneuvers, the ability to fly in close formation and into those dark, dusty, tight [landing zones] … it's going to enable our Army's ground forces' commanders to conduct operations that are nearly impossible today.”