Schriever Air Force Base on the plains east of Colorado Springs has always been a place of mystery. Home to... 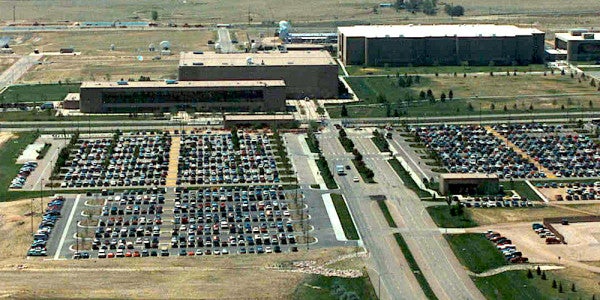 Schriever Air Force Base on the plains east of Colorado Springs has always been a place of mystery.

Home to the 50th Space Wing, which controls satellites including the Global Positioning System, Schriever has been dubbed “Area 52” and “The Place the Air Force Goes When it Wants to be Alone.”

But according to a fringe group headquartered in the United Kingdom, Schriever has another distinction: It's home to a space-based satellite electronic mind-control and torture system run by the United States.

Calling itself “hackthetorture.com” the group went on a Twitter offensive over the weekend to sell its conspiracy theory.

The group says it's loosely affiliated with QAnon, a right-wing American group that at its core says a vast conspiracy is targeting President Donald Trump.

The UK group also claims the U.S. government covered up the truth behind the 9/11 attacks.

It also says the Air Force has hundreds of satellites that can read minds and torture people from orbit.

There are a few problems with the group's satellite theory. First is the fact that mind-control technology hasn't been invented, unless you count the effect Instagram has on teenage girls. Second: The U.S. doesn't have nearly that many satellites, with just 282 launches of all kinds for the military and intelligence agencies since 1984. Third: Schriever, for all its secrecy is actually pretty boring.

The first two issues are settled fact, so I'll focus on the third.

Behind the prison-like double fence at Schriever are a few hundred airmen who fly satellites for a living. They control an array of communications and navigation birds, and probably a few of them control intelligence-gathering satellites.

The navigation satellites send out a radio signal that gives a constant update of the time — imagine looking at your watch every few seconds and announcing your findings to a crowd. It's important, but not something you'd write a novel about.

The communications satellites are basically cell phone towers in the sky.

The intelligence satellites, the very existence of which remains classified, are also not that exciting. They're pretty much copies of the Hubble Space Telescope that look down instead of up.

So, what proof exists that the U.S. doesn't have secret mind control technology? The examples are fairly easy to find. If the U.S. had more than 1,000 spacecraft equipped to change minds, I doubt the Taliban would still be targeting our troops. We'd probably also be selling a lot more Fords and Chevrolets in Japan, too.

If electronic mind control were possible and owned by the United States, we would have won the recent World Cup in soccer, President Trump would probably get fewer headlines and his complaint of “fake news” could be dealt with just a few signals from orbit.

Probably the only effective and globally-available mind-control device from the United States is a brownish liquid distilled in Kentucky.

None of the facts, though, seem likely to change the minds of those behind hackthetoture.com.