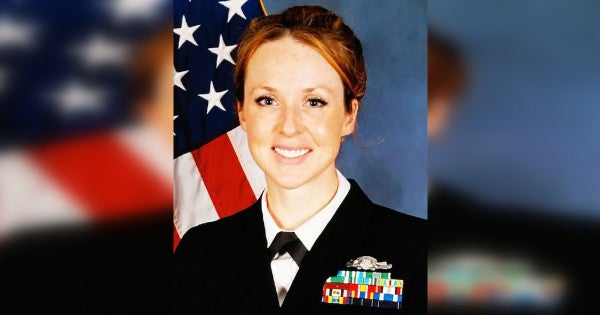 The honor would be the first for the Navy: Of the service's nearly 300 ships, fewer than a dozen are named for women and none commemorate a female service member killed in action.

A talented linguist, intelligence analyst and cryptologist, Kent enlisted in the Navy in 2003, inspired, according to Schumer, by her father and uncle, who both served as first responders in the World Trade Center attacks on Sept. 11, 2001.

Kent deployed five times, spending her tours serving as a member of Navy SEAL teams and other special operations elements. She spoke Arabic fluently, married a Green Beret and was the mother of two boys. After becoming a mom, she pursued a dream to become an officer, applying for — and receiving — a slot in a highly competitive doctoral program for clinical psychology.

But between pregnancies, Kent was diagnosed with thyroid cancer. While she was successfully treated, she was found medically unfit for the officer accession program. She later was denied a waiver for entry. Instead, in her 15th year of service, Kent prepared to deploy again, to Syria, where she'd been for roughly six weeks before she died.

Since her death, the Navy has changed its waiver and appeals process for commissioning programs, with Adm. William Moran, the service's vice chief of operations, telling her family that “there were many shortcomings in Shannon's case,” mainly “fundamental flaws in our waiver and appeal process.”

Moran promised a new policy that “will improve the quality, fairness and consistency of the medical waiver process” for all enlisted to officer commissioning programs.

Schumer said Kent's “groundbreaking achievements,” which include breaking barriers in the special operations community and calling attention to issues with Navy policies, deserve to be recognized “in a manner fitting.”

He asked that fellow senators support a proposed amendment to the Senate's version of the fiscal 2020 National Defense Authorization Act, which the legislative body will take up later this month.

“[Kent] was living proof that women can not only keep up with, but lead this nation's most highly capable service members,” Schumer said.

SEE ALSO: The Insider Attack In Syria That The Pentagon Denies Ever Happened