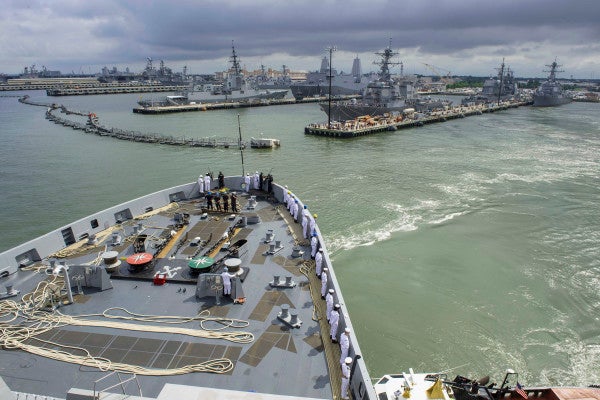 The latest scientific conclusion echoes others: It’s likely that sea level rise will eventually swallow huge swaths of Hampton Roads’ military installations, according to the Union of Concerned Scientists in a report scheduled for release today.

But if congressional Republicans have their way, the military will be blocked from doing anything about it.

Tacked on to defense spending bills passed by the House of Representatives: amendments forbidding the Pentagon from using federal dollars to study climate change or plan for its impacts.

Supporters say they want the military focused on enemies such as the Islamic State group, not rising seas.

Critics say flooding is a formidable foe as well.

“It’s kind of hard to attack the enemy when your base is underwater,” said Rep. Bobby Scott, a Southeast Virginia Democrat who voted against the ban.

Exactly how far underwater depends on a range of factors, says the report, which paints scenarios similar to those predicted in studies conducted by the Army Corps of Engineers and others.

For the US Military on the Front Lines of Rising Seas, the Union of Concerned Scientists looked at 18 East and Gulf coast bases, concluding that the high tide line will creep inland in the decades ahead, stealing training and testing grounds, infrastructure and housing. Storms will intensify the troubles.

“By 2050, most of these sites will see more than 10 times the number of floods they experience today,” said Kristy Dahl, a co-author of the report. “In 2070, all but a few are projected to see flooding once or twice every day.”

Subsidence – a sinking-land phenomenon occurring in Hampton Roads – will speed things up around at least two local bases: The Dam Neck Annex to Oceana Naval Air Station in Virginia Beach and Joint Base Langley-Eustis in Hampton could lose up to 95 percent of their land this century.

Norfolk Naval Station will flood roughly 280 times a year by 2050 instead of the current 10, if sea level rise reaches the midrange of predictions.

Right now, “a good thunderstorm can leave them not operating on all cylinders,” said Ray Toll, a retired Navy captain who works with a sea level rise initiative at Old Dominion University.

Toll says the Navy has been a vital partner in regional efforts to confront rising seas. “We have a challenge here, and the base is right in the middle of it,” he said. “They have been very proactive.”

But climate change is politically divisive in Washington, linked to executive orders for energy, conservation and climate resilience goals across the federal government.

To comply, the Defense Department created its own climate change adaption plan. Dam Neck built a one-mile rock-core dune to protect the main part of the installation from storm surge. Langley Air Force Base built a shoreline seawall and door dams, and installed a pump system.

Colorado Republican Rep. Ken Buck sponsored one of the amendments that would put a halt to such preparations.

“When we distract our military with a radical climate change agenda, we detract from their main purpose of defending America from enemies like ISIS,” Buck said in a statement on his website.

Scott hopes the amendments will die in the Senate.