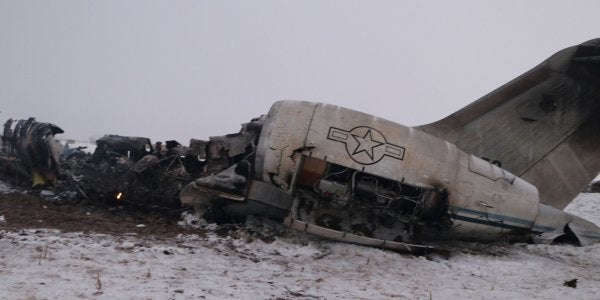 The bodies and a flight recorder were recovered during the mission, which was first noted by Connecting Vets radio and then reported by Newsweek. Sensitive military equipment from the plane was intentionally destroyed by the SEALs, according to Newsweek, and U.S. officials have not ruled out an airstrike if they deem that the aircraft's remains still pose a risk.

The U.S. has ordered airstrikes before to keep material out of the hands of adversaries. Following President Donald Trump's decision to pull troops out from Syria, the Air Force in October sent F-15 jets to strike against its own storage bunker, in order to prevent it from falling into enemy hands.

In the immediate aftermath of the crash, the Taliban ambushed Afghan security forces in a clash that prevented them from recovering the bodies.

The remains recovered by the SEALs were reportedly part of the 430th Expeditionary Electronic Combat Squadron from Kandahar Air Base, Afghanistan. A mayday call was issued prior to the crash at around 1:00 p.m. local time, a U.S. defense official with knowledge of the incident said to Newsweek.

Four E-11s, which are business jets refitted with communications equipment that can link ground troops together, operate out of Kandahar Airfield.

Following the reports of the crash, Taliban forces took responsibility and claimed dozens of people were killed in the incident. US military officials on Monday, however, reiterated that “there are no indications the crash was caused by enemy fire.”

A Taliban spokesman also claimed a joint Afghan government and U.S. military operation to secure the site was repelled by the militant group, but that a rescue team would be allowed to recover an estimated six bodies. But several newsreports citing US officials indicated there were only two to five people aboard the aircraft.