"He was willing to be whoever he needed to be to get those photos." 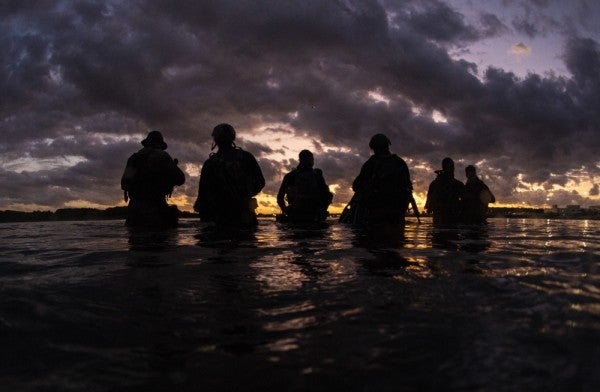 A court-martial for a member of the Navy's elite SEAL Team 6 who has been charged in connection with a scheme to receive nude photographs from a woman he worked with began Tuesday.

Military prosecutors say Petty Officer 1st Class Aaron Howard used text messaging apps that allowed him to use a fake phone number and pretend to be someone he is not in order to request nude pictures.

Lt. Kirwinn Mike, a Navy prosecutor, accused Howard of pretending to be a female performance dietitian who worked for Naval Special Warfare Development Group. Mike said that while pretending to be the dietitian, Howard told a woman by text message that he could provide her a body-fat analysis if she texted a picture of herself naked from the neck down and provided other measurements.

“He was willing to be whoever he needed to be to get those photos,” Mike said during opening statements.

Eventually, the woman who was asked for a nude photograph became suspicious and contacted the person the messages were purportedly sent from. The real-life dietitian then contacted authorities because she worried that other questions that were asked about SEAL identities could be a threat, perhaps from a foreign intelligence service.

Howard's civilian defense attorney countered that while the text messages are real, there's no evidence Howard sent them. Nor are there any nude photos on his phone or the victim's phone.

“Their case is in shambles,” Michael Waddington said. “You pull one string, it falls apart.”

But Waddington said the email address used to create the text messaging accounts aligns with another SEAL's nickname and that Howard was in Afghanistan when the original email account was created in Iowa. He said anyone could've linked that email address to Howard's IP address.

He also tried to cast doubt on the NCIS investigation during opening statements by saying investigators were given the names of 23 people the messages could've been from, but they failed to follow up on those leads.

The court-martial at Naval Station Norfolk is scheduled to last through Friday.