Gen. Joseph A. Dunford’s first term as chairman of the joint chiefs ends next year, but odds that the Obama-appointed... 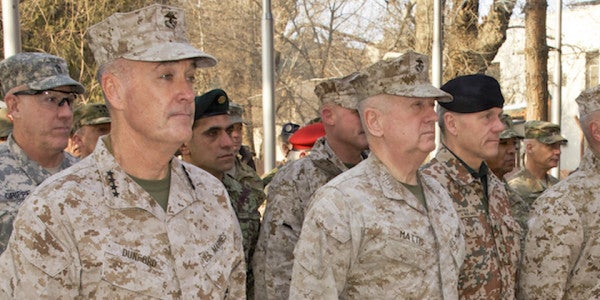 Trump has made it clear that he has no love for some of the generals who have served under President Barack Obama, and the president-elect has said he was likely to replace some of them.

Dunford’s term as chairman began in October 2015 and runs through 2017. Traditionally chairmen have been reconfirmed for a second two-year term, but it would be subject to Trump’s preference. Trump has not said whether Dunford will remain.

If Mattis is confirmed by the Senate and Dunford remains, it would pair two military leaders who have served together for decades and shared many years of combat.

Related: Mattis To Be Named Secretary Of Defense »

That alliance would make it very difficult for Trump to remove Dunford, said retired U.S. Marine Col. Mark Cancian, a senior adviser for international security at the Center for Strategic and International Studies, a nonpartisan Washington think tank.

“I think Mattis would push back very hard” if Trump were to press for a different chairman, Cancian said. “There’s no way Mattis would support his colleague of 30 years getting short-tenured.”

Trump has expressed his deep respect for Mattis, whom he introduced as “the closest thing to Gen. George Patton” when he announced him as his defense secretary pick in Ohio on Thursday. Trump said at the time he would officially name Mattis on Monday.War journalist Tom Ricks, author of 2012’s “The Generals,” said the Trump-Mattis relationship and the Mattis-Dunford connection should help insulate Dunford from Trump.

“Dunford has served under Mattis before in Iraq. That’s good because President-elect Trump is likely to be a bit suspicious of Dunford because he was promoted by President Obama,” Ricks said. “Mattis can disabuse him of that.”

Congress just passed legislation that will extend the terms for chairmen to four years. The language was part of the 2017 National Defense Authorization Act that was passed by the House on Friday and could go to the Senate this week. However, the four-year terms will not take effect until 2019, Cancian said.

Mattis and Dunford have a similar leadership style shaped by a no-nonsense approach to the Pentagon and a willingness to slice into its bureaucracy, retired Marine Corps Maj. Gen. Arnold Punaro said.

In 2010, Punaro worked on an initiative led by then-Defense Secretary Robert Gates to cut Pentagon headquarters positions to reduce spending. Punaro was a member of a panel that suggested cuts to U.S. Joint Forces Command, which Mattis was leading at the time. Mattis supported the decision.

“You will not find many military officers willing” to agree to cuts of their own commands, Punaro said. “That’s Joe Dunford and Jim Mattis.”

Retired Marine Corps Lt. Col. James Weirick said the combination of the two generals at the helm is likely to lead to more forces remaining in Afghanistan and Iraq. Dunford was the top commander in Afghanistan during Mattis’ final month as the commander of Central Command.

At the time, Mattis proposed keeping 20,000 forces in Afghanistan as the Obama administration transitioned from combat to a train-and-advise mission in late 2014. That same year, after Dunford’s Afghanistan tour ended, he told lawmakers during his Senate confirmation hearing to become commandant of the Marine Corps that he did not support the withdrawal of forces by 2017.

In July, Obama revised the drawdown plan and 8,400 troops are set to remain in Afghanistan after his presidency ends.

Gen. John Nicholson, the top U.S. commander in Afghanistan, told reporters Friday at the Pentagon that he welcomed Mattis as the next defense secretary.

He met Mattis in Nangarhar province in Afghanistan, “where we were in a tough fight in 2006,” Nicholson said. “He’s a very inspirational leader. I know he inspired me as a soldier on the ground as we talked about that very tough fight.”