"I believe the process matters for good order and discipline." 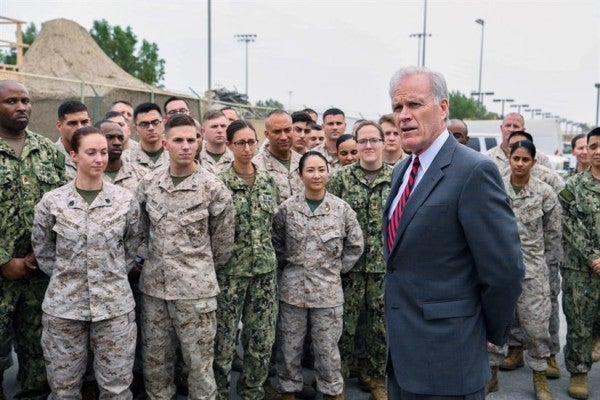 HALIFAX, Nova Scotia (Reuters) – U.S. Navy Secretary Richard Spencer said on Friday a Navy SEAL convicted of battlefield misconduct should face a board of peers weighing whether to oust him from the elite force, despite President Donald Trump's assertion that he not be expelled.

“I believe the process matters for good order and discipline,” Spencer told Reuters, weighing in on a confrontation between Trump and senior Navy officials over the outcome of a high-profile war-crimes case.

A military jury in July convicted Special Operations Chief Edward Gallagher of illegally posing for pictures with the corpse of an Islamic State fighter but acquitted him of murder in the detainee's death. Gallagher also was cleared of charges that he deliberately fired on unarmed civilians.

Although spared a prison sentence, he was demoted in rank and pay grade for his conviction, which stemmed from a 2017 deployment in Iraq.

Last Friday, Trump intervened in the case, ordering the Navy to restore Gallagher's rank and pay and clearing the way for him to retire on a full pension.

But Navy brass notified Gallagher, 40, on Tuesday that a five-member panel of fellow Navy commandos would convene on Dec. 2 to review his case and recommend whether he is fit to remain in the SEALs.

A decision as to whether Gallagher is ejected from the SEALs, stripping him of his special warfare Trident Pin, ultimately rests with the Navy's personnel command in Washington. Gallagher would retain his rank but be assigned to other duty, though his lawyer has said he will be eligible to retire soon.

On Thursday, Trump lashed out at the proceedings, declaring on Twitter: “The Navy will NOT be taking away Warfighter and Navy Seal Eddie Gallagher's Trident Pin. This case was handled very badly from the beginning. Get back to business!”

The Navy responded with a statement saying it would follow “lawful orders” from the president to halt the review but was awaiting further guidance, suggesting his Twitter post was not considered a formal directive.

Asked whether he believed the proceedings against Gallagher should continue, Spencer, in an interview at the Halifax International Security Forum in Nova Scotia, said, “Yes, I do.”

“I think we have a process in place, which we're going forward with, and that's my job,” he added.

It was not immediately clear how the showdown between Trump and Navy leaders might affect separate trident review board proceedings convened for three of Gallagher's commanding officers.

Critics have said Trump's grants of clemency last week to Gallagher, and to two Army officers separately accused of war crimes in Afghanistan, will undermine military justice and send a message that battlefield atrocities will be tolerated.

The trident review hearings for Gallagher and his immediate superiors were ordered by the commander of Naval Special Warfare, Rear Admiral Collin Green.

Gallagher's lawyer, Timothy Parlatore, contested the Navy's move to oust his client in a complaint filed on Monday with the Defense Department's inspector general, accusing Green of challenging Trump's authority as commander in chief.