A New River Air Station commander relieved of her command June 7 wasn’t the only senior officer recently reprimanded by... 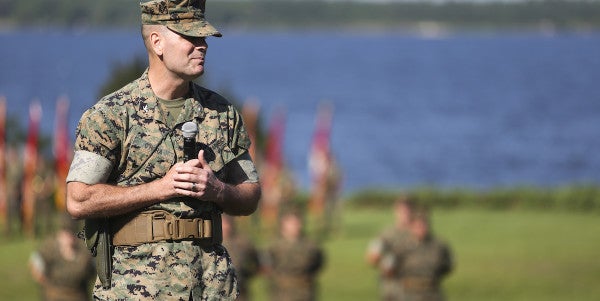 A New River Air Station commander relieved of her command June 7 wasn’t the only senior officer recently reprimanded by command.

Col. Daniel P. O’Hora, commander of the Marine Corps Engineering School aboard Camp Lejeune, was fired June 6 by Brig. Gen. Jason Bohm, head of training command. In a press release, Bohm states his reason for O’Hora’s dismissal is for “loss of trust and confidence in his ability to serve in command.”

An investigation into O’Hora has been opened and remains ongoing, according to the release.

One day after O’Hora’s firing, Lt. Col. Jennifer L. Grieves, 46, the former commander of the Marine Heavy Helicopter Squadron 464 lost her command “due to a loss of trust and confidence in her ability to continue to lead,” according to a media advisory issued by ll MEF Public Affairs Office. The order to relieve Grieves was issued by Maj. Gen. Matthew Glavy, commander of the 2nd Marine Aircraft Wing.

Grieves was reassigned for “not properly reporting an incident” which is being investigated by the Naval Criminal Investigative Service, according to Lt. Col. Mike Armistead, ll Marine Expeditionary Force public affairs director.

Grieves has been reassigned within ll MEF, according to Armistead.

“Being relieved of command does not equate to a drop in rank or pay. Once relieved, an officer is typically moved to a non-command billet determined by higher headquarters. Duties would vary depending on what billet they fill,” Armistead wrote in an email reply to questions submitted June 8 by The Daily News.

Grieves, who has served 27 years in the Marine Corps, was arrested by the Onslow County Sheriff’s Office on Dec. 16, 2016, and charged with misdemeanor simple assault. The charges were subsequently dropped on Dec. 22, 2016, by the complainant who is Grieves’ wife.

Grieves, who assumed command of the squadron in May 2016 has been replaced by Lt. Col. Troy Callahan, formerly of Marine Operational Test and Evaluation Squadron One as its commander.

Scott Jack, a former Marine Corps Staff Judge Advocate officer told The Daily News recently that military officers who find themselves involved in legal or potentially incriminating situations should “beat the news to their commanding officer. Generals hate to be surprised by learning about an incident in the news,” Jack said. “This should be done after ‘calm reflection’ and advice of counsel, if available.”

The act of self-reporting an incident to the proper commander doesn’t alleviate the incident from the record or keep an adverse fitness report from being created, but it can weigh heavy on the outcome, Jack said.

“It’s best to be honest, straightforward and explain in ‘shorthand’ what happened,” Jack said.