The CIA used an alleged accomplice in the Sept. 11 terror attacks as a test subject to train new interrogators.... 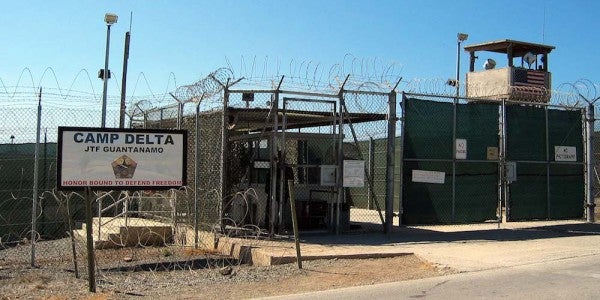 The CIA used an alleged accomplice in the Sept. 11 terror attacks as a test subject to train new interrogators. Agents diapered or left naked a one-legged CIA captive during his time in secret overseas detention. Taking showers still traumatizes the alleged USS Cole bomber, whom the CIA waterboarded in 2003.

These and other details emerged from McClatchy’s review of 1,300 pages of partially declassified transcripts of Guantánamo’s secret death-penalty case sessions that have been gradually made public since February.

Although still heavily redacted, the transcripts show a consistent theme across 30 hours of closed war-crimes hearings: When the public and accused terrorists aren’t allowed to listen, the legal arguments are often about the CIA’s secret overseas prison network, the circumstances of Guantánamo detention and how now outlawed Bush-era interrogation methods might affect future justice.

In 2002 and 2003, “Essentially the United States government is running a Turkish prison. And that’s an insult, probably, to Turkey, frankly,” Navy Cmdr. Brian Mizer, a defense attorney, told a judge in a May 2014 court argument initially labeled top secret.

To mount a proper death-penalty defense in the USS Cole bombing case, Mizer said, his team needs “the gritty, granular detail” of what U.S. agents did to Abd al Rahim al Nashiri, the Saudi man accused of plotting al-Qaida’s suicide bombing that killed 17 American sailors on Oct. 12, 2000. His jury needs to “smell the urine, the feces, the blood, the sweat and see just how vile and disgusting this process was.” Then, if Nashiri were convicted, defense lawyers can ask the jury, “Do you have to kill him now?”

The transcripts come from a renewed Pentagon effort to clear a four-year backlog of transcripts at the Guantánamo court. In December, the Sept. 11 trial judge, Army Col. James L. Pohl, complained to prosecutors that the government wasn’t following his order to “expeditiously” release an unclassified version of the transcripts for the public to see, according to the declassified tranche.

Before the transcripts were released, security officials blacked out portions that remain classified and began posting redacted versions on a Pentagon website in February.

What has emerged is a puzzling patchwork of information. Some full pages are blacked out. Sometimes the censors released only fragments of sentences, making for quirky reads like this, which came at the end of four full pages of remarks that are entirely blacked out: Army Brig. Gen. Mark Martins, the chief prosecutor, declares on Jan. 11, 2018, “When the transcript comes out, they’ll all be able to see all the stuff I just said because [REDACTED].”

Still, the transcripts yielded some intriguing information from hearings that were closed to both the public and the defendants:

Guantánamo’s covert lockup, Camp 7, was built in 2004. That was two years before the CIA delivered Khalid Sheik Mohammed, the accused chief plotter of the Sept. 11 attacks, and 13 other black-site captives to the island prison for trial. The year of construction, revealed in June 3, 2016, testimony, was long considered secret — so much so that the prison commander declined to answer the question during a meeting with reporters in June, even as he made a pitch for money from Congress to build a more efficient $69 million version, complete with a hospice wing for aging captives.

A defense attorney declared in May that from their September 2006 arrival at Guantánamo until January 2007, those accused of planning the Sept. 11 attacks were “essentially entirely CIA prisoners” — not strictly detainees of the U.S. military. “I’ve never disclosed that information to anybody,” defense attorney Jay Connell told the judge, according to a declassified transcript. In open court he had used an approved intelligence-community talking point that Camp 7 “continued under CIA operational control for some period of time.” Those four months matter because in January 2007 FBI agents interrogated the terror suspects to gather evidence apart from their years of CIA abuse. And now defense lawyers want the judge to exclude those so-called clean-team interrogations from trial as tainted by torture.

In CIA custody, alleged 9/11 plot deputy Walid bin Attash “was stripped of his clothes and photographed while nude; he was subjected to long periods of nudity; he was interrogated while nude,” defense attorney Cheryl Bormann told a war court judge on Feb. 25, 2016, a description that was not contained in the declassified section of the torture report released by the Senate intelligence committee. “When not forced to urinate and defecate into a diaper, he was forced to urinate and defecate into a bucket while monitored.”

In a January hearing, Air Force Capt. Brian Brady, a defense lawyer, told the judge that defense lawyers need to know what U.S. intelligence agencies are operating at Guantánamo. If there was an active presence of the National Security Agency or Defense Intelligence Agency at the detention center, Brady argued, lawyers might be able to argue that some trial evidence was manipulated by the intelligence community.

Pohl inquired: “Let’s say, for example, either the CIA or the detention facility themselves record a conversation, and then they forward the recording or the information to the NSA or the DIA. Would that be the type of involvement you’re talking about, or are you talking about the direct involvement at the time?” Brady replied: “Both, judge.”

In February 2007, Khalid Sheik Mohammed reportedly boasted to a military panel that he personally beheaded Wall Street Journal correspondent Daniel Pearl “with my blessed right hand.” Mohammed has never been charged with the 2002 murder in Pakistan. But in a passing remark at the same closed January session, prosecutor Bob Swann told the judge that Mohammed “has provided many statements” about the grisly beheading — leaving unclear whether they were obtained through surveillance or interrogations.

The transcripts also provide new details about day-to-day operations at Camp 7, for high-value detainees, such as the 9/11 plotters, who were waterboarded, sleep-deprived, had their heads slammed into walls and were subjected to forced rectal feeding or rehydration during their years of secret CIA custody:

A Navy medic and nurse are on duty around the clock but there generally is no after-hours doctor on site.

Each cell has an adjoining outdoor recreation yard that each inmate can open or close, one commander said.

At times the detention center has allowed communal prayer.

The U.S. military videotapes “forced cell extractions,” a tackle-and-shackle technique to remove a defiant inmate from a cell but troops don’t record when guards force a defiant captive into his cell.

In early 2016, two Pentagon intelligence programs classified above top secret called ACCMs, Alternative Compensatory Control Measures, were operating at Guantánamo. They were so highly classified that only the few officials who were deemd ACCM “indoctrinated” were allowed to stay in the courtroom while the measures were discussed. Any discussion of the program is blacked out in the released transcripts. Later that year, a transcript shows, one of the ACCMs had been disbanded. Their code names, however, are still secret.

For 9/11 families and others watching the pretrial proceedings as they unfold, the transcripts at times answer questions raised in the public sessions:

On Feb. 25, 2016, Martins explained why defense attorneys had to settle for an FBI mock-up of a former CIA black site in a secret country where prisoners were held. “We are no longer in control of that site,” Martins is quoted as saying. “We don’t have a place to give … access to.” Defense attorneys said they learned long afterward that the U.S. destroyed the site, despite a preservation order on any remaining black sites. Prosecutors said the prison that was returned to the unidentified host country was “decommissioned,” not destroyed.

On May 29, 2014, Mizer expresses fear that he would be prosecuted if he shares classified material with his client. He explains why he wants the Justice Department to give him what he calls a “get out of jail free” card, a formal agreement explaining he can do so. “In 2009, the FBI came into our spaces and read rights to (former defense attorney) Lt. Col. Jon Jackson over photographs that were allegedly taken into the 9/11 case. That is seared in my mind, that they have no regard for defense attorneys. They will come after us one by one.” (Jackson was never charged).

War court policy on what defense lawyers can show and tell their clients has evolved in Guantánamo’s USS Cole bombing and Sept. 11 terror attacks death-penalty cases. Initially, after those clients’ 2011 and 2012 arraignments, classified material was off limits because the prisoners don’t have security clearances. Now, prosecutors sometimes designate certain documents the defense lawyers can show their clients.

Some of the transcripts offer new information from the CIA black site prisons that were shuttered a decade ago — or the continuing effects.

Alleged 9/11 plotter Ammar al Baluchi, Khalid Sheik Mohammed’s nephew, was used as a test subject in a CIA training exercise for new interrogators, Connell told the judge on May 3, 2018. “They brought in new interrogators and they experimented on Mr. al Baluchi and then said, ‘No, no, you didn’t do that right. Do it again.’ “

The CIA declined to discuss the disclosure with McClatchy, leaving unanswered whether such training sessions were common or whether they were practicing a method for asking questions or practicing the kinds of physical abuse that the Bush administration dubbed Enhanced Interrogation Techniques.

Connell said government documents demonstrate that one instructor had also interrogated Baluchi — apart from the training — to gather intelligence.

The interrogator/instructor, identified as X3L, had “personally drowned him, what they call water-dousing, which is basically waterboarding without a board.” He also “personally walled Mr. al Baluchi,” which means slamming his head into a wall to get him to answer questions. “He is also the person who performed—,” Connell is quoted as saying before the rest of the sentence is blacked out.

Connell told the judge that he needs to track down and question the interrogator as he prepares for trial, the transcripts show. But prosecutors currently forbid that.

In one 2016 hearing, Army Col. Steve Gabavics, the Guantánamo prison warden, explains why he rejected a defense request to let Nashiri, the alleged USS Cole bomber, spend nights in his war court cell rather than go back and forth to the prison, a trip that makes the captive nauseated.

Part of his concern is for the captive’s security when he’s away from the maximum-security Camp 7. Part of it is a lack of basic services at the court’s holding cell, which has a bunk, stainless steel toilet, and sink but no shower.

“Are you familiar with the fact that he doesn’t like to take showers,” Nashiri ‘s attorney Rick Kammen asked, explaining that “showers remind him of when he was waterboarded by the United States?”

“I’m not aware of that part,” Gabavics replied in an exchange that was initially classified. “I know that he does not like to take showers.”