Sen. John McCain has a form of brain cancer that was discovered when doctors removed a blood clot above his... 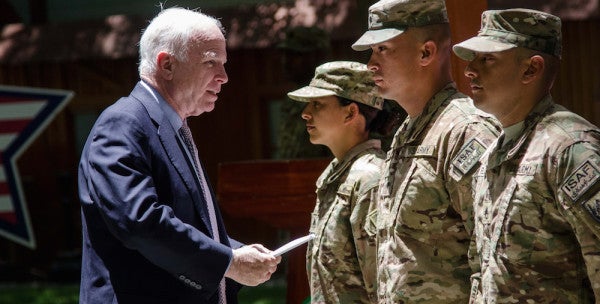 Sen. John McCain has a form of brain cancer that was discovered when doctors removed a blood clot above his left eye, his office said Wednesday night.

“The Senator and his family are reviewing further treatment options with his Mayo Clinic care team,” according to McCain’s office. “Treatment options may include a combination of chemotherapy and radiation.”

Glioablastoma is as an aggressive form of brain cancer, making up about 15 percent of all primary brain tumors, according to the American Brain Tumor Association. Patients typically undergo surgery first to remove as much of the tumor as possible, then are treated with radiation and chemotherapy to slow the growth of any remaining malignant cells that cannot be removed.

McCain, 80, was the 2008 Republican presidential nominee and Vietnam War hero and he has been in Congress representing Arizona since 1983, first in the House then the Senate four years later. He had been recuperating in Arizona since the procedure to remove the blood clot.

Senate Majority Leader Mitch McConnell said in a statement that McCain is “a hero to our Conference and a hero to our country. He has never shied from a fight and I know that he will face this challenge with the same extraordinary courage that has characterized his life.”

McCain’s office said his doctors said the senator’s recover from the surgery is going “‘amazingly well’ and his underlying health is excellent.”