A bill affording the Department of Veterans Affairs secretary more power to punish employees passed the Senate on Wednesday, overcoming... 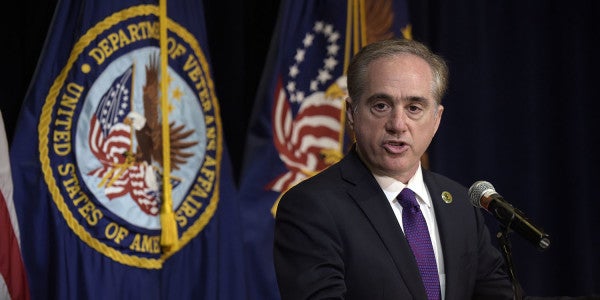 A bill affording the Department of Veterans Affairs secretary more power to punish employees passed the Senate on Wednesday, overcoming a hurdle that similar legislation over the past two years never did.

The legislation, S. 1094, is a bipartisan deal created to grant more firing authority to the VA secretary. It passed on a voice vote and will now go to the House. A vote count was not recorded.

“I think this is one of the days in the Senate where we can look back and say folks came together as Democrats and Republicans and did the right thing,” said Sen. Jon Tester, D-Mont. “We’ve been at this for a while. I hope it’s worth the wait.”

In a joint statement after the Senate vote, Rep. Phil Roe, R-Tenn., and Rep. Tim Walz, D-Minn., applauded the move and asked House leadership to quickly schedule a vote on the bill.

The measure would shorten the time that VA employees are allotted to appeal any disciplinary action against them, and it would require quicker determinations from the Merit Systems Protection Board, which hears the appeals. The bill would also allow the VA secretary to reduce the pension of a VA employee and recoup bonuses and relocation expenses in certain instances.

It also establishes a time limit for employee grievance procedures and lessens the evidentiary standards that the VA is required to meet to uphold decisions to fire employees.

In a briefing at the White House on May 31, Shulkin again took an opportunity to call upon the Senate to pass the bill.

Law states federal employees are allotted 30 days advance written notice before they’re fired, demoted or suspended. Shulkin explained 1,500 VA employees are in that stage right now, awaiting disciplinary action. The span of time from when a manager decides to fire an employee to their actual removal now averages 51 days, he said.

The legislation that passed the Senate on Wednesday would cut that 30-day advance notice period to 10 days.

“Our accountability processes are clearly broken,” Shulkin said at the time.

The VA and lawmakers have used a few examples when advocating for the legislation.

In one instance, two executives were found to have manipulated the hiring system to move to positions of lesser responsibility while maintaining the same salary. The Merit System Protection Board last year reversed the VA’s attempt to discipline them.

More recently, the VA had to wait more than a month to fire a Houston psychiatrist who was caught watching pornography in front of a patient in April.

Shulkin said the VA was forced to allow an employee in Memphis, Tenn., to return to work last month after she was convicted of her third driving-while-intoxicated charge and served 60 days in jail.

Sen. Johnny Isakson, R-Ga., chairman of the Senate Veterans’ Affairs Committee, said the bill passed Wednesday could “correct the problems of the past.”

“We are not singling out an agency that has a large number of people that are not performing. It’s an agency where some people have done some egregious things that need to be addressed,” Isakson said. “Now they will be, under the new law. They’ll be held accountable for their actions.”

The bill will now go to the House. The House unanimously passed different legislation in March that went even further to limit VA employees’ appeals options.

Federal unions have opposed both bills.

The American Federation of Government Employees and the National Federation of Federal Employees, both of which represent thousands of VA workers, said the legislation would restrict due process rights.

“I would expect to see quality employees leaving the VA in droves,” he said in a written statement.

A few dozen VA employees represented by the American Federation of Government Employees attended the hearings on the bill in the past month. Union President J. David Cox condemned the lowered evidentiary standard to discipline an employee.

“The innocent will be fired without cause. The appeals will be a humiliating joke, and the executives will continue to ruin the lives of workers and hurt veterans,” Cox told lawmakers at a May 17 hearing.

Several amendments to the bill proposed by Democrats were shot down by the Senate Veterans’ Affairs Committee.

Lawmakers speaking in favor of the legislation on the Senate floor Wednesday were adamant the rights of VA employees would be maintained.

“This is not a punitive measure. This is not an anti-VA employee law,” said Sen. Marco Rubio, R-Fla., one of the bill’s sponsors. “It’s designed to reward those who work hard and perform, and identify and remove those who do not.”

While asking his fellow senators to support the measure, Isakson displayed a poster board printed with the logos of major veterans organizations supporting it. The list of groups includes the American Legion, Paralyzed Veterans of America, Veterans of Foreign Wars and Iraq and Afghanistan Veterans of America. Many veterans groups see it as a solution to rid the agency of a perceived culture of corruption.

One group, Concerned Veterans of America, made the discipline of poor-performing VA employees one of its top priorities the past four years. CVA is a conservative-leaning advocacy group reported to be associated with the Koch brothers’ political network.

Since it was discovered that veterans were waiting for VA care while languishing on secret wait lists, the group has spent millions of dollars lobbying for legislation like what the Senate passed Wednesday.

In 2015 and again in 2016, legislation was introduced but stalled in the Senate.

“We devoted a lot of effort and resources to really advancing legislation to fix the issue,” said Dan Caldwell, policy director for CVA. “We hit a wall in the Senate in 2015 and 2016, but now, with the new political environment, we’ve finally been able to get movement. Veterans across the country were paying close attention to who supported this effort. It’s long overdue.”