The Senate Armed Services Committee voted late Wednesday evening to block the U.S. military from ever interfering with the right of Americans to peacefully protest 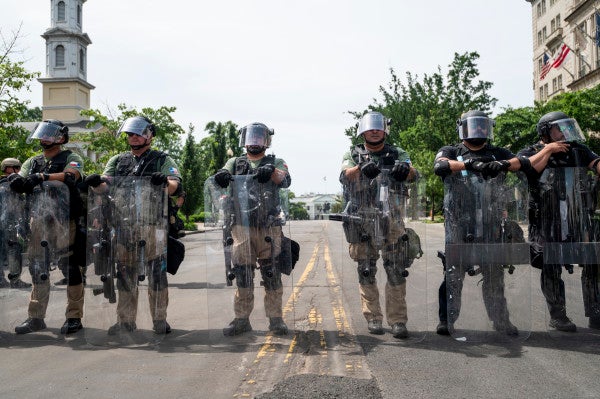 WASHINGTON — The Senate Armed Services Committee voted late Wednesday evening to block the U.S. military from ever interfering with the right of Americans to peacefully protest.

The provision, by Virginia Democrat Tim Kaine, was an amendment to the panel’s annual defense authorization bill, which the committee considered behind closed doors.

Text of the amendment was not immediately available. But Senate aides said it would bar use of Defense Department funds or U.S. military personnel against Americans exercising their First Amendment right to demonstrate.

In a statement Thursday, Kaine said that offering his amendment was “something I would never have thought I needed to do until last week.”

Kaine was referring to this month’s heated national debate over the use of the military to aid law enforcement.

The conversation was sparked by mostly peaceful protests in dozens of U.S. cities — with looting, vandalism and some violence on the fringes — after Minneapolis police killed a black man named George Floyd on May 25 by crushing his neck into the pavement as they took him into custody.

More than 60,000 National Guard troops were activated at the peak of the protests earlier this month.

President Donald Trump and others had advocated using regular military troops, too, to support police and Guard units, but reportedly faced resistance from senior Defense Department leaders. Trump has said he only advocates using military force against criminals, not peaceful demonstrators.

Police, not military forces, were implicated in nearly 200 incidents of allegedly excessive force during the protests, many of which were caught on video. The police launched the attacks largely against peaceful protesters, and in dozens of cases they attacked reporters who had clearly identified themselves as media.

Perhaps the most striking incident came on June 1 in Lafayette Square park across from the White House. After Attorney General William Barr had ordered an area near the park cleared of protesters — and just before Trump and senior administration officials, including military leaders, used the area for a photo-op — police swung clubs and fired rubber bullets, tear gas and pepper spray at peaceful protesters, according to videos and witnesses.

D.C. National Guard troops participated in the operation, but what they did is still unclear. Senior Pentagon officials have made certain statements about what nonlethal weapons Guard troops may have used that night. But the Guard has not responded to repeated requests from CQ Roll Call for a more complete account of the kit they carried and how they used it that evening.

In addition to the vote on Kaine’s amendment, the Senate Armed Services Committee voted down, in a party-line vote, an amendment by Richard Blumenthal, D-Conn., that would have revised how the 1807 Insurrection Act can be used to deploy active-duty U.S. troops to quell riots.

Among its provisions, Blumenthal’s proposal would clarify that the Insurrection Act can only be invoked to protect, not restrict, civil rights.

It would require the president to consult with Congress prior to invoking the law. And the president would have to justify in detail to Congress why the state either requested the troops or was unable or unwilling to enforce federal law without them.

Blumenthal hinted he may bring his amendment up on the Senate floor when the chamber debates the National Defense Authorization Act.

“I’m disappointed more of my Senate Armed Services Committee colleagues don’t agree that the use of military force against Americans at home should demand at least the same Congressional oversight that applies to his use of force against adversaries abroad,” he said in a statement.