The U.S. Senate has confirmed the appointment of Maj. Gen. Laura J. Richardson to be the next deputy commanding general... 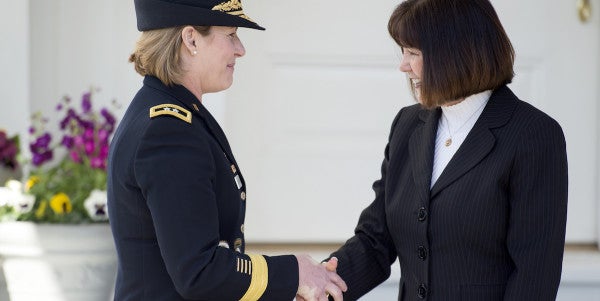 The U.S. Senate has confirmed the appointment of Maj. Gen. Laura J. Richardson to be the next deputy commanding general of U.S. Army Forces Command.

Richardson, who will be promoted to lieutenant general on Monday, will be the first female Army officer to officially hold that position.

For more than a week, another female Army officer, Maj. Gen. Jody Daniels, has filled the position on an interim basis. Daniels is Forces Command’s chief of staff.

According to officials, Richardson will report to Fort Bragg to take her position in early July.

She is serving in Washington, where she is chief legislative liaison in the Office of the Secretary of the Army.

“Maj. Gen. Richardson personifies the highest standards of the Army and our officer corps,” said Gen. Robert “Abe” Abrams, the commanding general of Forces Command. “Throughout her distinguished career, she has led by outstanding personal example from the front — in combat, and in challenging command and staff positions of great responsibility.”

Forces Command is the largest command in the U.S. Army, responsible for training and preparing active, Reserve and National Guard troops to meet the requirements of combatant commanders around the globe.

As deputy commanding general, Richardson will be heavily involved in ensuring the nation’s soldiers are ready for future deployments and contingency operations.

“She will be an outstanding addition to the Forces Command leadership team,” Abrams said. “With more than 30 years of service, Maj. Gen. Richardson's breadth and depth of experience across the operating and generating force, coupled with her extensive experience in legislative liaison make her the exact right leader to carry forward Forces Command's focus on Army readiness, the Total Force, and our soldiers and families.”

Richardson was commissioned in 1986, after graduating from Metropolitan State College. She spent much of her career in Army aviation, serving in Korea and at Fort Campbell, Kentucky.

According to officials, Richardson flew UH-60 Black Hawk helicopters and deployed to Iraq for the start of Operation Iraqi Freedom as commander of the 5th Battalion, 101st Aviation Regiment, 101st Airborne Division.

She also deployed as a brigadier general to Afghanistan in 2013-14 to serve as deputy chief of staff, communications, for the International Security Assistance Force.

Richardson also has served as deputy commanding general of support for the 1st Cavalry Division at Fort Hood, Texas, and as commander of Fort Myer, Virginia.