A key group of senators took the country’s top defense officials to task Tuesday over their inability to obtain crucial... 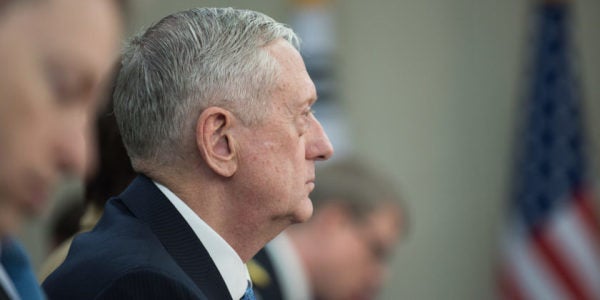 A key group of senators took the country’s top defense officials to task Tuesday over their inability to obtain crucial details from the Pentagon or the White House on the U.S. war strategy in Afghanistan.

Defense Secretary Jim Mattis and Marine Gen. Joseph Dunford, the chairman of the Joint Chiefs of Staff, received a frustrated and sometimes angry reception during a hearing of the Senate Armed Services Committee focused on military plans in Afghanistan and South Asia.

At the start of a full day of congressional hearings for Mattis and Dunford, Sen. John McCain, chairman of Armed Services Committee, said the Pentagon was woefully behind on its responsibility to work in concert with Congress.

“We want to be your partners. But this committee will not be a rubber stamp for any policy or president. We must be well-informed,” a frustrated McCain, R-Ariz., told Mattis and Dunford at the hearing. “We must be convinced of the merits of the administration’s actions. And unfortunately, we still have far more questions than answers about this new strategy.”

The hearing highlighted the strained relationship between key senators and President Donald Trump’s administration especially as it attempts to revamp the U.S. strategy to combat terrorism overseas.

The new strategy includes sending about another 3,000 U.S. troops to Afghanistan. Dunford said the United States is spending about $12.5 billion annually for the war in Afghanistan. The additional 3,000 troops will cost another $1.1 billion, he said.

Mattis’ and Dunford’s testimony on Capitol Hill comes during the week of the 16th anniversary of U.S. forces fighting in Afghanistan. U.S. and coalition forces began combat operations against al-Qaida in the country in 2001 following the 9/11 attacks. More than 2,000 U.S. troops have been killed and more than 20,000 injured in the war.

In highlighting the communication breakdown between Congress and the Pentagon, McCain scolded Mattis and Dunford for their “bizarre” move not to submit prepared written testimony to the Armed Services committee ahead of Tuesday’s hearing.

I recognize “the need to maintain the closest possible dialogue with Congress, and specifically with this committee,” he said. “I pledge the Department of Defense will be fully responsive to your requirement to be kept appraised of current and planned operations.”

Mattis then expanded on the Pentagon’s new strategy to “regionalize, reinforce, reconcile and sustain” operations in Afghanistan. The strategy is to focus on a larger region that includes India, Pakistan and other surrounding countries, realign with more advisers on training and advisory support and ensure the plans are sustainable, he said.

Today, there are about 11,000 U.S. troops in Afghanistan along with more than 320,000 Afghan and coalition forces.

“We must always remember, we are in Afghanistan to make America safer and ensure South Asia cannot be used to plot trans-national attacks against the U.S. homeland or our partners and allies,” Mattis said.

Mattis and Dunford, who testified for more than two hours before the senators, also testified Tuesday afternoon before the House Armed Services Committee. The afternoon hearing went even longer, almost four hours, as House members asked a wide range of questions.

One significant focus: Mattis said the United States should remain in its nuclear agreement with Iran, contradicting Trump’s earlier comments that it was time to end the deal.

The hearings Tuesday follow a confirmation hearing last week for Dunford, who was easily re-appointed to his position. However, this was after McCain raised growing concerns over the disconnect between Congress and the Pentagon.

Senators at their hearing also raised a concern that few specifics have been revealed about the Trump administration’s plans to change the U.S. strategy in Pakistan.

“Too often, members of this committee are learning in the media for the first time about major national security and military activities,” McCain said last week.

Instead, Congress should be informed and consulted, McCain said. Otherwise, it could be forced to take extreme actions to ensure it is part of the conversation, he warned.

“We have to provide our troops with the vital authorities and resources they need to perform their missions,” McCain said. “That is our separate, co-equal responsibility under the Constitution.”

Other senators raised a concern that the new Afghanistan strategy won’t lead to success.

“Sixteen years of evidence suggests otherwise,” argued Sen. Elizabeth Warren, D-Mass. The new strategy could be “more of the same.”

“After 16 years, should the taxpayers of America be satisfied we are in a ‘stalemate’?” McCain asked. “I don’t think so.”

In August, Trump reversed course on a campaign pledge to pull U.S. troops from Afghanistan, instead laying out a new but vague plan to boost the troop count there. The move came after months of questions and delays.

Since the Aug. 21 announcement, there have been limited new details on the new plan other than the addition of about 3,000 troops.

“In the six weeks since the president made his announcement, this committee, and the Congress more broadly, still does not know many of the crucial details of this strategy,” McCain said. “This is totally unacceptable.”