Police have now apprehended everyone they believe was involved in the attempted robbery of a convenience store that ended with senior airman Shawn Mckeough Jr's death. 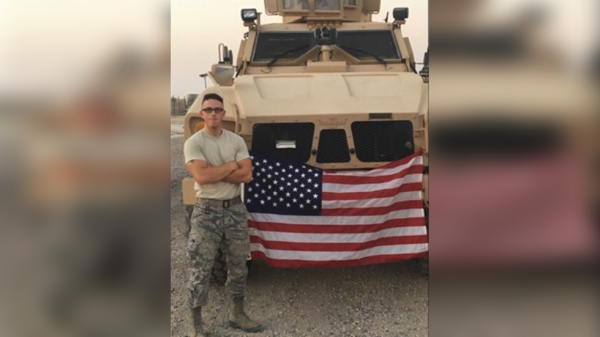 Two more teenagers have been arrested in connection with the shooting death of senior airman Shawn Mckeough Jr. in Arkansas last Friday.

Police in North Little Rock said Wednesday that Darrius Stewart, 17, and Keith Keshawn Harris, 16, have been charged with capital murder, for which they could face the death penalty, and aggravated robbery.

Both were due in court Wednesday morning and prosecutors are expected to try them as adults, police said.

Two others — Drequan Lamont Robinson and Keith Lamont Harris, both 18 — were arrested earlier this week and appeared in court on Tuesday. Both pleaded not guilty and were ordered held without bail.

Police have now apprehended everyone they believe was involved in the attempted robbery of a convenience store that ended with Mckeough's death.

According to court documents and police reports, Stewart and Robinson were dropped off at the Valero Big Red around 11:30 p.m. The two others stayed in the car.

Stewart and Robinson disguised their faces and then entered the store with guns drawn.

They ordered the customers in the store to lie on the ground and one of the them shouted at the cashier, “You think this is a (expletive) game. You think I am playing. Open the drawer right now.”

At that point, Mckeough, an active duty senior airman at nearby Little Rock Air Force Base, charged at Stewart, who told police he heard a gunshot.

Mckeough was shot in the face and died at the scene. He was 23.

The two suspects fled before the cashier could hand over any money.

Mckeough had gone to the store with his girlfriend, Sarah Terrano, also of Westbrook, and three other friends. Terrano waited in the car and saw the two men go into the store and raise their arms toward the cashier and then the customers. She didn't see the shooting but heard the gunshot.

Family and friends of Mckeough, who has been in the U.S. Air Force since he graduated from Westbrook High School in 2014, said he died trying to protect others but also called the killing senseless.

His funeral arrangements have not been finalized.