The Unflinching Sentinels Who Guard The Tomb Of The Unknown Soldier

Monday morning, thousands of people made their way to Arlington National Cemetery for the Memorial Day wreath-laying ceremony at the Tomb... 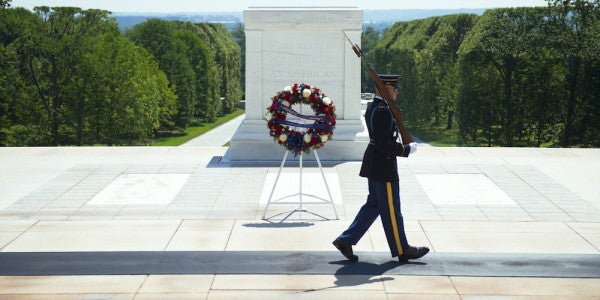 Monday morning, thousands of people made their way to Arlington National Cemetery for the Memorial Day wreath-laying ceremony at the Tomb of the Unknown Soldier. Many more will watched on TV.

The cube-shaped marble monument high on a grassy hill is guarded by a small cadre of soldiers, known as Sentinels. They wear sharply pressed blue wool uniforms, white gloves, and black shoes buffed to a high gloss. They carry a rifle over their shoulders.

The sentinels take 21 slow and solemn steps during the changing of the guard, honoring the fallen on behalf of a grateful nation.

Benjamin Bell of Tampa earned his place among this group in 2001, just a month before the terrorist attacks of 9/11. He wore badge No. 494 on the right pocket of his uniform jacket, signaling his place among just 659 people who have guarded the tomb since the badges first were issued in 1958.

“I remember being really moved by all those moms who were there, hundreds of them on Memorial Day,” said Bell, 37. “They were there to honor unknowns, but also to remember their sons and daughters who passed away in service to the country.”

Taking a deep breath, he collected his thoughts.

“I can’t talk about this without getting emotional. My heart is tied to that cemetery. Tied to the unknowns. It is part of who I am. It never leaves.”

Bell grew up in Winter Haven and wanted to be a soldier for as long as he can remember.

His parents urged him to consider another line of work.

“They really wanted me to think about it,” said Bell, now a nurse at the James A. Haley Veterans’ Hospital polytrauma center. “They wanted me to go to college and do other things.”

Eventually, Chuck and Angie Bell got the message that their son was serious.

“When they realized how serious, my mom co-signed me into the military when I was 17,” Bell said. “Of course she was worried and would be until I got out, especially when the war in Iraq started. I went to Iraq a bunch.”

Bell joined the Army in 1999 and was assigned the 3rd Infantry Regiment. Known as the “Old Guard,” organized in 1784 and now the Army’s longest-serving active-duty infantry unit.

A military policeman, Bell was inspired to become a sentinel after a tour of Washington, D.C., that included a visit to Arlington National Cemetery. The burial ground was created on land once owned by Robert E. Lee.

“The last place they take you is the Tomb of the Unknown Soldier, to watch the guard change,” Bell said. “It struck me then as something special.”

Bell quickly set his sights on joining the ranks of the sentinels.

He visited the tomb when he could, made friends with sentinels and reached out to the sergeant of the guard at the tomb to learn how he could join.

The advice was simple.

Have good physical training scores. Be a good soldier. Don’t screw up.

It wasn’t simple, though, to earn a posting as a sentinel.

First, Bell had to convince his chain of command this was a worthy endeavor. Then he had to win a competition involving running, pushups, marksmanship and other measures.

The first time around, he lost out to a friend. Eventually, he made it.

The posting, though, was just the beginning.

Training was intense, a series of five exhaustive tests over six to twelve months.

Bell recalls spending hours trying to get his uniform just right, standing in front of mirrors and practicing the 21-step walk, making sure he could answer every question.

Among his class of five, Bell was the only one who earned the badge.

It would be three months before he would earn his first walk.

“It was pure nerves and anxiety.”

Bell was in the barracks the morning of Sept. 11, 2001, when American Airlines Flight 77 slammed into the Pentagon.

“They called us to the tomb to set up a perimeter,” he said.

“I could see smoke rising from the Pentagon. One of the most vivid memories I have is seeing it rise over treeline for days.”

Look perfect to the public as they stand guard and during the changing of the guard ceremony, regardless of weather, sporadic taunts from the crowd or the occasional insect attack.

“The summer is brutal,” Bell said. “I am a sweaty guy and the uniform gets ruined from sweating out there.”

Rainy days could be frustrating.

Being from Florida, Bell enjoyed standing out in winter storms.

“It was romantic. The snow was falling. It was kind of peaceful.”

One summer, cicadas infested the cemetery — and landing on his face.

“I couldn’t react or move.”

So he stood at attention. And honored the dead.

For the most part, the crowds respect the solemn nature of the tomb, Bell said.

People tried to tell jokes to get him to laugh. Some yelled to try and surprise him. Little kids sometimes did dances to get a reaction.

“If people are joking or talking too loud, I would break ceremonial position and tell them that it is requested the visitor remain silent while at the national shrine.”

“You could hear a pin drop after that.”

For sentinels, being selected for the walk is an honor they vie for on a daily basis.

Assignment to the midday walk, called the “noon moon,” is the ultimate prize.

“The bell chimes 12 times. It is the peak walk. People want to earn it. When you are the best walker, you get to showcase yourself.”

Bell was a sergeant when he took his last walk at the tomb in June 2004 as he was preparing to leave the Army.

It was an emotional event.

“Oh man, I was a mess. I knew it was over. You leave part of you behind when you know you will never guard the tomb again.”

As Americans wrap up the three-day respite from work that is Memorial Day Weekend, Bell has a simple message.

Enjoy the weekend, but remember the meaning.

“I don’t get too bent out of shape that people think this is a day for barbecues. I would just like to remind people to take time to reflect on all the sacrifices people have made for this country.”