An auction of unclaimed service member household goods that started a social media firestorm had the military’s blessing and included... 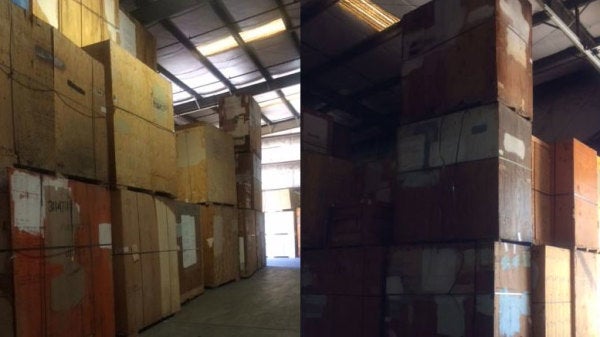 An auction of unclaimed service member household goods that started a social media firestorm had the military’s blessing and included items that had been abandoned for a decade or more, according to the company and U.S. Navy officials.

Gene Daniels Auctions of Chesapeake, Va., had planned a since-postponed May 6 auction of 105 containers, containing over 78,000 pounds of unclaimed shipments from overseas military moves.

A post on the company’s Facebook page stated: “Unclaimed Shipments from Overseas. These shipments are unclaimed household goods/personal property of military members who were stationed in locations such as Italy, Germany, Spain and Bahrain.”

It added that the containers likely include “hidden treasures” and included a photo of shipping crates with recent dates stamped on them.

The advertisement provoked a barrage of angry comments as well as calls to the auctioneers and Bay Area Movers, the company that transported them.

Both Navy officials and Bay Area Movers owner Jean McRae told Stars and Stripes that the crates with recent date stamps pictured in the advertisement weren’t part of the auction.

No one had claimed the items up for auction or paid for their storage in several years, she said.

“There were approximately 50 different lots of storage ranging from the 1990s to mid-2000s,” McRae said. “The government was no longer covering storage on these shipments and had stopped many years ago.”

Tom Kreidel, a spokesman at the Navy’s Fleet Logistics Center Norfolk in Virginia, said the sale was approved by the government.

“The vast majority of the items in question have been in storage for between 10 and 25 years at the facility,” Kreidel said in an email statement. “The Navy worked with the storage facility to conduct a review of all 47 customers through the Service Member Civil Relief Act website. Of these only one customer is still active duty.”

Servicemembers are responsible for the cost of temporary storage of household goods after 90 days, according to Navy guidelines.

“Unfortunately, some of our service members fail to make payment arrangements,” Kreidel said. “In this particular case, the warehouse waited years and years without receiving payment before finally making the decision to take actions to auction the shipments.”

“We try to do the best job we can and for someone to call up and say angry things to you, it’s uncalled for,” she said. “I just wish people would check out the facts before they start rumors through social media.”