A highly-decorated Navy SEAL was killed in a skydiving accident on Saturday. The SEAL, Cmdr. Seth Stone, died after jumping... 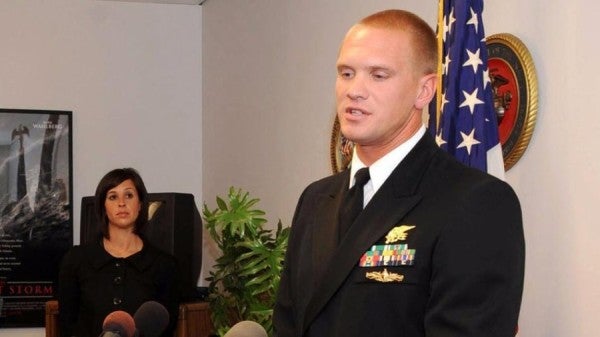 A highly-decorated Navy SEAL was killed in a skydiving accident on Saturday.

The SEAL, Cmdr. Seth Stone, died after jumping out of a hot air balloon in Perris in Riverside County, California. The Federal Aviation Administration said his parachute failed to open properly and the agency is investigating.

Stone, 41, of Texas, was most recently assigned to Special Operations Command Pacific in Hawaii, a unit that receives Navy personnel from the Naval Special Warfare Command in San Diego.

“The Naval Special Warfare community is deeply saddened and mourns the tragic loss of one of our best. Seth's absence will be sorely felt across the staff, command and the entire special operations community. NSW is a close-knit family and our primary focus is to provide care and support for Cmdr. Stone's family,” said Rear Adm. Tim Szymanski, commander of the Naval Special Warfare Command.

Stone earned two silver Silver Stars, the military’s fifth-highest commendation, including one for a well-known firefight in Ramadi, Iraq. On Sept. 29, 2006, Stone and the group of SEALs under his charge were attacked with small arms fire and rockets while they were protecting another unit.

“The mortar fire, machine gun fire randomly sprayed the patrol, who were contacted by the enemy about 75 percent of the time,” Stone told National Public Radio in 2008.

According to the citation for the medal, Stone led them through the firefight to wounded SEALs, and helped evacuate the wounded.

One SEAL under Stone, Petty Officer Second-Class Michael Monsoor, was killed after he threw himself on top of an enemy grenade. He was credited with saving several lives and was posthumously awarded the Medal of Honor.

“He recognized immediately the threat, yelled grenade, and due to the fact that two other SEAL snipers, our brothers, could not possibly escape the blast, he chose to smother it with his body and absorb the impact and save the guys to his left,” Stone told NPR.

Stone, who died one day after the tenth anniversary of Monsoor’s death, was on an adjacent rooftop during that battle and later said the petty officer’s bravery inspired him to re-enlist after the end of that deployment.

Besides the two Silver Stars, Stone also received a Bronze Star with a “V” insignia for valor, and the Navy Marine Corps Commendation Medal. Commissioned through the Naval Academy in 1999, he was a surface warfare officer and was assigned to a cruiser before he trained to become a SEAL.

The FAA said it typically looks into whether parachutes were properly packed when it investigates accidents that occur during skydiving. The accident is being investigated by civilian authorities since it occurred off-duty.

According to the Naval Safety Center, a command that tracks on- and off-duty accidents involving sailors and Marines, the last fatal skydiving accident involving a member of the Navy outside of training or a mission was in June 2010 when a petty officer first class died after he attempted to jump from a cell phone tower in southeast Virgina.

The United States Parachute Association held the National Skydiving Championship in Perris over the last two weeks, but the accident was not related to that event, the organization said. The Army’s skydiving team, the Black Knights, participated in the competition.