The new defense chief, a former Boeing employee, has reportedly been extremely critical Lockheed Martin's F-35 Lightning II Joint Strike Fighter in private meetings, raising questions about whether he is bias in overseeing the largest weapons program in history 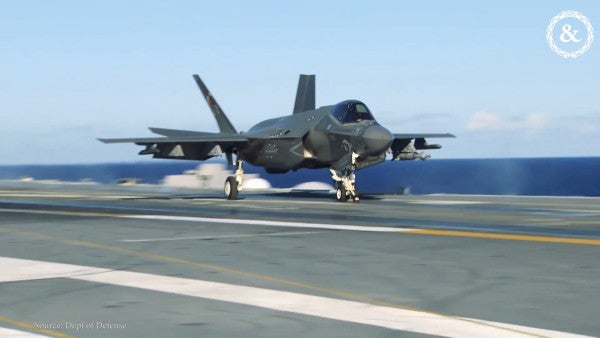 The new defense chief, a former Boeing employee, has reportedly been extremely critical Lockheed Martin's F-35 Lightning II Joint Strike Fighter in private meetings, raising questions about whether he is bias in overseeing the largest weapons program in history.

Acting Secretary of Defense Patrick Shanahan, who took over in the wake of former Defense Secretary Jim Mattis' resignation, spent more than 30 years at Boeing before he joined the Department of Defense in 2017 as the deputy secretary of defense.

Although he signed an ethics agreement recusing himself from participating in matters involving Boeing, the new defense chief has continuously bashed a key program for one of Boeing's top competitors in high-level meetings at the Pentagon and other private gatherings, Politico reports, citing former government officials who personally heard Shanahan make critical comments.

Shanahan reportedly called the F-35 stealth fighter “f—ed up,' saying that Lockheed “doesn't know how to run a program.”

“'If it had gone to Boeing, it would be done much better,'” a former official recalled Shanahan saying, Politico reported.

He is said to have “dumped” on the aircraft regularly, with a former Trump administration official noting that he kind of “went off” on the program last year. “He would complain about Lockheed's timing and their inability to deliver, and from a Boeing point of view, say things like, 'We would never do that,'” the former official revealed.

In other private meetings, Shanahan has reportedly called the program “unsustainable,” complaining about the cost in particular of the stealth fighters, with separate versions built for the Navy, Marines and Air Force. The F-35 is expected to cost more than $1 trillion over the life of the program, making it the most expensive weapon in US military history.

Current administration officials, however, told Politico that Shanahan's comments are being taken out of context, stressing that he is not advocating for Boeing. “I don't believe that's the case at all. I think he's agnostic toward Boeing at best,” one official explained. “I don't think there's any intent to have Boeing favored in the building.”

This is not the first time Shanahan's loyalties have been called into question. The Pentagon is supposedly planning a request for $1.2 billion for 12 Boeing F-15 X fighter jets, a decision that was made at Shanahan's urging, according to Bloomberg News. Air Force leaders had previously stated that there was no reason to buy these advanced fourth-generation fighters because these aircraft lack the necessary stealth capabilities provided by fifth-generation planes, according to Defense News.

Despite the allegations, Shanahan's office says he remains committed to the recusal. In public, he has spoken highly of the F-35 program.

“The F-35 is our future,” he said in September at the Air Force Association's Air, Space and Cyber Conference. “I think we can all agree that it is a remarkable aircraft, with eye-watering capabilities critical to the high end fight.”

“I tip my hat to its broad team of government, industry, and international partners. Having worked on programs of similar size and complexity, I have enormous respect for your talent and commitment.”