Shia militia groups in Iraq were likely responsible for the attack on Wednesday that killed one British and two American troops at a base north of Baghdad, said General Kenneth McKenzie Jr. 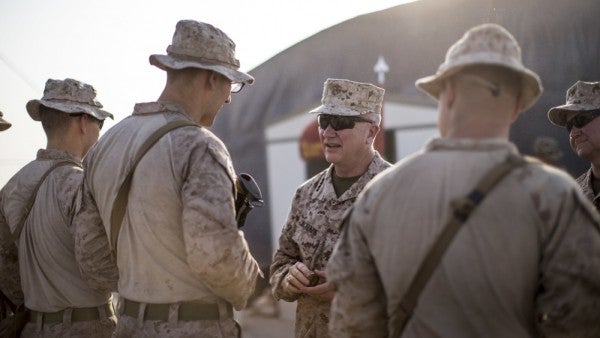 WASHINGTON (Reuters) – Shia militia groups in Iraq were likely responsible for the attack on Wednesday that killed one British and two American troops at a base north of Baghdad, a top U.S. general said on Thursday, in remarks that leave the door open to potential escalation with Tehran.

U.S. Marine General Kenneth McKenzie, the head of the military's Central Command, did not blame any specific militia but noted that only Iran-backed Kataib Hezbollah had been known to wage such an attack in the past.

“While we are still investigating the attack, I will note that the Iranian proxy group Kataib Hezbollah is the only group known to have previously conducted an indirect fire attack of this scale against U.S. and coalition forces in Iraq,” McKenzie told a U.S. Senate hearing.

Washington blamed Kataib Hezbollah for a strike in December that killed a U.S. contractor, leading to a cycle of tit-for-tat confrontations earlier this year that culminated in January's U.S. killing of top Iranian general Qassem Soleimani and a retaliatory Iranian missile attack that left more than 100 U.S. troops with brain injuries.

A U.S. official, speaking on condition of anonymity, said a total of 30 of the rockets were fired from nearby truck and that only 18 of them landed at the Iraqi base.

On Wednesday, the U.S.-led coalition said about a dozen personnel were injured. McKenzie told the Senate there were several servicemembers injured, which leaves open the possibility that the additional wounded were contractors.

In a sign of concern that tensions between the United States and Iran could be headed toward open conflict, the Democratic-led U.S. House of Representatives passed legislation on Wednesday to limit President Donald Trump's ability to wage war against Iran.

The Republican president has been engaged in a maximum-pressure campaign of renewed sanctions and near-constant rhetoric against Iran, after pulling the United States out of the international nuclear deal reached during the administration of his Democratic predecessor, Barack Obama.

Tensions between Washington and Tehran have mostly played out on Iraqi soil in recent months.

Iran-backed paramilitary groups have regularly been rocketing and shelling bases in Iraq that host U.S. forces and the area around the U.S. Embassy in Baghdad.