The UK’s Shrinking Military Presence Is Damaging The Whole World 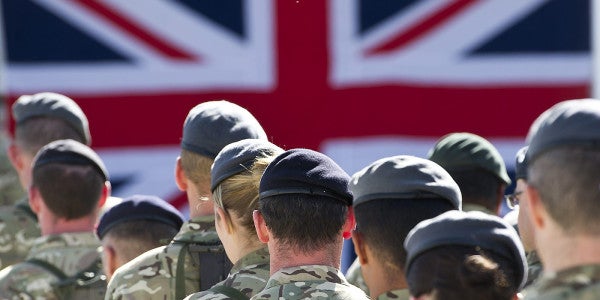 I’ve served as a Royal Marine (42 CDO) and in the French Foreign Legion (2 REP), and I’ve also worked in the oil, gas and mining industries in and around Africa and the Middle East.

One thing I have noticed throughout those places in Africa and the Middle East is that as the U.K. pulls out of these areas, the rule of law is replaced with the rule of the gun. How many times have we heard “the world is the most dangerous it has ever been” in the last few years?

The U.S. Marine Corps is smallest of the American armed forces, yet its budget is about the same as the entire U.K. defense budget.

The U.K. has had its head in the sand for the last 50 years, with successive governments cutting the armed forces year after year. It has come down to the near end of the Royal Navy, with just 19 escorts, of which less than half are able to go to sea, due to lack of spare parts and personnel. Few people have noticed it, but the RN is being helped by the U.S. Coast Guard and Canadian navy, who both supply marine engineers.

What about our big new supercarriers? Well, we will indeed soon have two of them. But they won’t have any fixed-wing aircraft till 2021 or 2023. Also, we only have 7 SSNs, again with less than half able to put to sea, due to the same shortages as the surface escorts.

Money is hard to come by in the U.K. at the moment. So what we need is a radical re-think on how to revamp our ailing Royal Navy (and Army and Air Force). The U.S. Marine Corps is smallest of the American armed forces, yet its budget is about the same as the entire U.K. defense budget.

Even then, the USMC gets more ships than the U.K.'s Navy, more tanks than the British army, and more aircraft than the Royal Air Force. Why is this? One answer: too many middle men! I say cut them out, and have a common-build program for all of the armed forces; operate them like the USMC — that is, as one force, rather than as three separate forces competing against each other.

Another way is to put cheaper vessels into service more quickly (the average build of an escort in the U.K. is 10 years). From paper to water has to be no more than 3 years. A tall order? Well, back in 1906 the U.K. had Admiral Fisher in charge, who took direct control of the design and build of HMS Dreadnought (the first ever iron battleship). With him at the helm it took 101 days — yes, days — from paper to her maiden voyage.

A quick fix for the aircraft carriers would be to put a flight of MV-22s on board each carrier, so at least they could then start operating as a troop carrier, and the flight deck crews could then start using fixed-wing aircraft, bringing them up to speed for when the F-35s arrive, sometime in the 2020s. Another remedy would be to bring in a class of escorts like the USS Independence-class trimaran, but made from steel rather than aluminum. The three hulls could be made in separate yards and then bought together for completion and fitting out, saving time and money.

If you agree with me and you are British, please write to your local MP and let them know what you think. If we don’t change course, we risk losing an effective RN, Army and RAF for good.

Alfie Rake served in the Royal Marines (42 Cdo) from 1979 to 1983, then joined the French Foreign Legion (2REP) from 1986 to 1991, serving in Djibouti, Chad and the Republic of Central Africa. He has worked in the fishing industry and offshore in the oil, gas and mining industries, setting up exploration operations off the east and west coasts of Africa in some of the most pirated seas on Earth. He also has helped establish onshore remote area operations in the Middle East.