Love is hard to find. It's even harder if you're in the Navy. At least, that's what single sailors told... 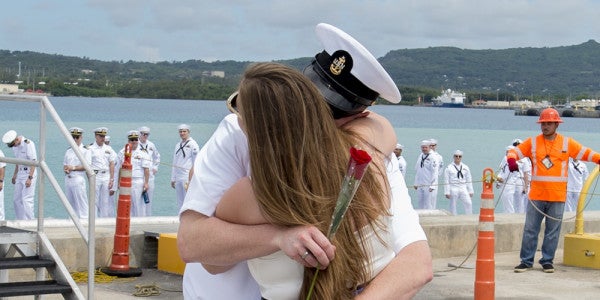 Love is hard to find. It's even harder if you're in the Navy.

At least, that's what single sailors told Navy officials in a new survey on personal and professional choices released Wednesday.

The survey did not delve into details about why sailors feel the Navy makes them less likely to wed, but the challenges of developing and sustaining relationships during lengthy deployments and over the course of frequent moves around the globe are well known.

“Results indicate that Navy careers negatively impact the personal lives of men and women,” an executive summary of the survey's findings says.

The Navy is interested in these details and others about family life because it matters to sailors and the Navy wants to retain talented personnel. It also says these issues can impact readiness.

Of those relationships where both serve in the military, 56 percent of sailors said they're satisfied with their ability to co-locate in the same region as their spouse, while 21 percent were dissatisfied, the Navy said.

Meanwhile, 60 percent of married sailors said their Navy career has negatively impacted their spouses' employment opportunities. Many states are working to ease licensing requirements for military spouses in professions like teaching so they can have an easier time finding work after being transferred.

Sen. Tim Kaine also has introduced legislation aimed at improving the job chances of military spouses that includes changing federal hiring procedures to expedite hiring of spouses on or near military installations and encouraging private defense contractors to focus more on hiring military spouses. The legislation also aims to improve access to child care and asks the Defense Department to study how to expand the awareness of career training programs for spouses of service members.

The survey received responses from 8,040 men and 4,642 women and has a margin of error of 1 percent, according to the Navy.